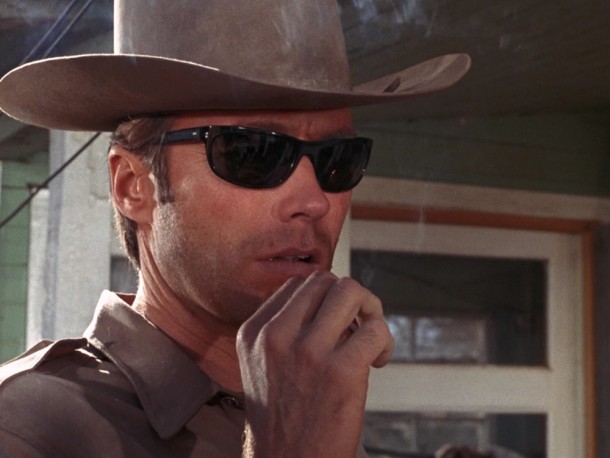 COOGAN’S BLUFF began the creative partnership between Clint Eastwood and Don Siegel. Of the five films they made together Dirty Harry (1971) has become a benchmark detective film and The Beguiled (1971) a Southern Gothic cult classic. But what of the reputation of Coogan’s Bluff? Certainly its attitudes towards women and racial issues have slightly dated the film. Yet as a comedy drama / action cop film / western, it’s under-valued today. Even director Don Siegel is sadly not celebrated enough to warrant a complete season at the BFI Southbank. A pity, for Siegel was a brilliant and highly dependable craftsman who can put to shame many current Hollywood ‘storytellers.’

Arizona deputy sheriff Walt Coogan (Clint Eastwood) is sent to New York to extradite escapee killer James Ringerman (Don Stroud). However Ringerman has overdosed on LSD and can’t yet be released from hospital. This poses no obstacle for Coogan who ignores Lieutenant Mc Elroy (Lee J.Cobb) and en route seduces probation officer Julie Roth (Susan Clark). Linny Raven (Tisha Sterling) is a client of Roth. Coogan finds her file and then persuades Linny to lead him to her boyfriend Ringerman: the result is two misfired capture attempts.

One of the great pleasures of Coogan’s Bluff is the witty script. The fish out of water country sheriff Coogan, landing in the big city, suffers jokes and jibes from everyone about his dress and manner. His large hat and sleek pointed boots mean that Coogan’s assumed to be a cowboy from Texas, not Arizona. This labelling becomes one of the film’s running gags as well as Coogan’s shrewdness over not being ripped off, especially in the very funny taxi-cab scene.

This deputy sheriff’s appearance may look out of place but he’s too wised up for the urban cops, managing to ignore McElroy’s sarcasm when directed at Coogan’s tough guy obstinacy.

The remark is thought to have come from an early John Wayne western or even George Stevens’ Shane. Not quite. Its more of an amalgamated misquote from both sources, and others. Such a playful putdown of Eastwood’s macho persona makes for great fun as Eastwood delivers one of his most laconic and relaxed performances, minimal acting delivered by a real Hollywood star.

Siegel directs the whole affair with style and panache – two outstanding action scenes are the brawl in the poolroom and the motorcycle chase climax. And Siegel understands how to use the city itself as a performer to provide great atmosphere – there’s usually a drunk entering the frame to knock over a trash can and New York’s parks and skyscrapers throb with visual energy. But most of all Coogan’s Bluff’s pleasures lie in the great dialogue that hums alongside of its economical editing and exciting staging.

In the book Don Siegel: A Siegel film the director records how they re-wrote the first scripts of Coogan’s Bluff. Siegel and Clint Eastwood sat on the floor and literally cut up and pasted together the best bits of each script (“A game of scrabble” admitted Siegel). Afterwards another scriptwriter was proposed.

Me (Siegel): Clint wants you to fix up the already written material. He doesn’t want you to write a new fifth version.

(Dean Riesner, the newly hired writer, gets up and pats me on the cheek.)