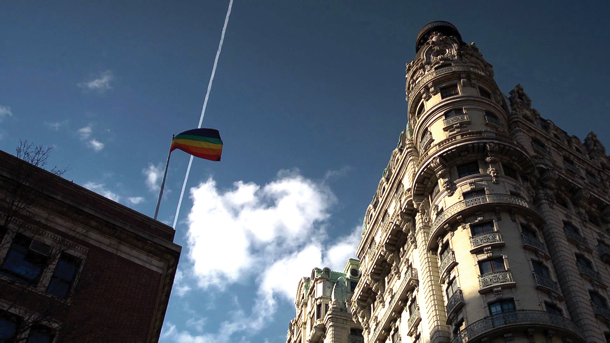 Malcolm Ingram (Small Town Gay Bar) tells the story of the legendary “Continental”, a New York bathhouse for the gay community. Founded by the maverick Steve Ostrow in 1968, it was situated on the site of the Ansonia Hotel on 74th Street. The 400 rooms were used by 20 000 patrons a week; when Ostrow closed the “Continental” in 1974 six million visitors has seen its transfiguration from a hedonistic pleasure pool to an artistic centre. Ostrow borrowed the money for his enterprise from his father-in-law and had to live with corrupt cops as well as Mafiosi, who all took their share from the profits (the entrance fee was 15 Dollar).

Ostrow, a professional opera singer, comes over larger than life. He now lives in Australia, where he cares for the older members of the gay communities. And it is in Sidney, where he realised his greatest dream: singing the title role in Verdi’s “Othello”. His musical education helped him to transform the “Continental” from a pure pleasure heaven into an artistic centre. Patti Labelle, Peter Allen started their career here, as did Bette Midler, accompanied at the piano by Barry Manilow. But it was this new cultural identity, which was the main reason for the closure of the bathhouse in 1974. Sure, rival companies had sprung up, but Ostrow said, that the gay community felt, that they were looked at like animals in a zoo, by the ever growing number of straight people who came to visit. It was true, the “Continental” had changed from being a refuge for gay people, to being a meeting point of the cultural elite. Even Alfred Hitchcock was spotted there, dressed only in a towel.

It was difficult to avoid doing this as a ‘Talking Heads”  documentary, and the stills from the old place are mixed with contemporary shots of the same neighbourhood today. The rare footage of the entertainers in the heydays of the Continental are refreshing and raise many questions, in particular it begs to know why Bette Midler did not want to participate. Ingram avoids nostalgic reminiscing about a “golden age for the gay community before AIDS”, but delivers instead a well structured documentary lesson about gay history. AS

THE CONTINENTAL SCREENED AS PART OF THE BFI FLARE 2014 FESTIVAL