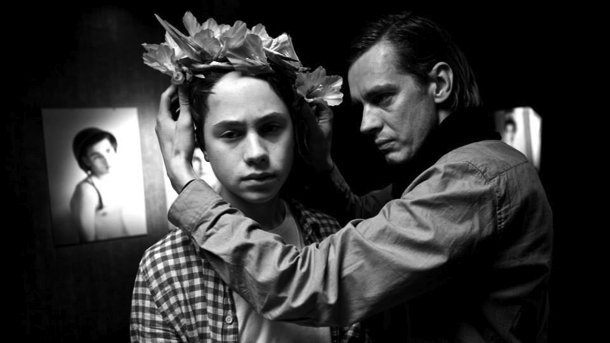 Teenager Simo lives with his much older brother Ilkka and his alcoholic mother in a cramped high rise block flat in the outskirts of Helsinki. The film starts with a dream: he sits in a train, driving over a bridge which collapses, leaving him drowning in his bed. Simo has an ambivalent relationship with both: on the one hand he admires his tough brother (who is going to prison for a drug offence), on the other hand Simo fears that he will end up like him.  His love for his mother is offset by her neglect and near permanent drunkenness. Simo is slim, and his movements are effeminate;  he is well aware of this and fears he will be mistaken for a homosexual.

In the opposite block lives a man who the brothers call ‘poof’, even though they have nothing but their prejudice to determine his sexual orientation. Illka has a bad influence on his younger brother, telling him “that women liked to be hit”.  Later we see Illka abusing and degrading his girl friend Vera. Their mother is afraid (seemingly without reason), that Illka might commit suicide – but it turns out that it is Simo who needed her help. When he is visiting the neighbour they called a homosexual.  Simo’s fear of being mistaken for one leads to violence, his dream becoming reality. 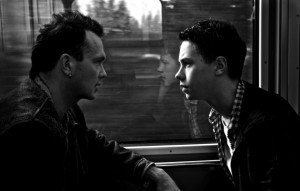 This is the first feature for fifteen years of 66-year-old Pirjo Honkasalo, who is well known in her homeland for her documentaries. The film is based on a novel by Pirko Saisio, who also wrote the script for Honkasalo’s last feature. CONCRETE NIGHT is shot in black and white and is stunning to look at. F W Murnau would be proud to have directed it, had he still been alive. The characters live in shadows, the only light trying to get in is artificial and deflected. Even when the brothers make the trip into central Helsinki, it never gets properly light. The acting is sparse, reminding us of the early films of British realism of the 60s.

The landscape surrounding the estate is gloomy, reassembling some giant tip where everything has been dumped and discarded, including the people. The weather is harsh and unforgiving like everything else this film. Honkasalo’s use of restrictive dialogue strongly evokes the characters mistrust of feelings; their fear is couched in latent violence. In spite of this, there are moments when he camera shows Simo in a poetic, even lyrical way. Although these moments are short, they give us an idea of what could have been. A small masterpiece, but utterly depressing. AS