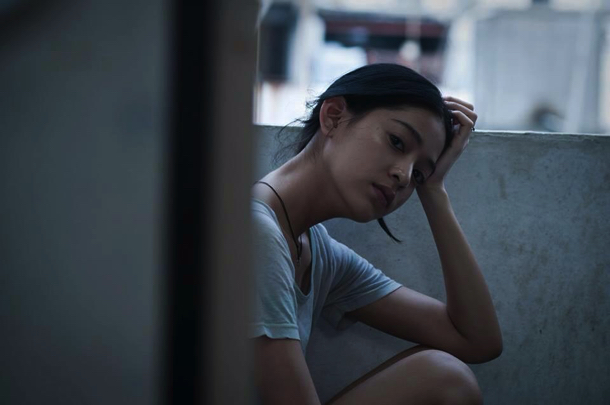 First time writer/director Lee Chatametikool has edited Apichatpong Weerasethakul’s feature films since 2002, and the Palme D’Or winner is one the producers of Concrete Clouds. But whereas Apichatpong’s features are strictly arthouse, standing out for their originality and enigmatic narratives, Chatametikool has delivered a very mainstream soap opera, where the blandness of what actually happens is dressed up in pretentious dialogue and dreamy images.

Set in 1997, when Thailand was rocked by a financial crisis, Concrete Clouds starts with a quote by Milan Kundera “The only reason people want to be masters of the future is to change the past”. The quote is superimposed on blueprints of houses never to be built, since its developer jumps out of the window of his forth floor house, a victim of the financial crisis. In New York, his son Mutti (Everingham), a stock trader, who lives with his girl friend Katherine (Reilly), an art student, learns of his father’s death and boards a plane to Bangkok, where he meets his teenage brother Nik (Hansten), who lives a listless and unfocused existence. The brothers have nothing in common, and soon Mutti’s interest shifts to his ex-girlfriend Sai (Parnto), an ex-actress, now working as a PR adviser. Nik’s love interest, Poupee (Sakuljaroensuk), has been left alone by her older sister, an escort, and is about to follow in her footsteps, accepting a job in a night bar, to the great chagrin of Nik. It turns out, that Sai too is a financially stressed: her flat has been re-possessed, and instead of making love to Mutti, she phones a wealthy suitor to bail her out. Her criticism of Mutti is as trite as clichéd: “You have put me on a pedestal, and I will fall”. Sai and her pseudo glamorous girl friends seem only to be interested in shopping, complaining “the currency thing is infringing my rights to shop”.

Apart from the rather superficial narrative, the director seems to have a problem with women in general: Katherine, the only independent woman, remains a cypher, whilst Poupee and her older sister are selling themselves to men, and Sai is hardly an improvement; choosing financial security over love. The two male leads are self-seeking, only focusing on immediate satisfaction. The mostly impressive cinematography tries to conceal the emptiness of Concrete Clouds: it is a misogynist rant about the drawbacks of crass materialism, but showing exactly the same failings by investing into aesthetics, and totally neglecting any real criticism of society’s values. AS