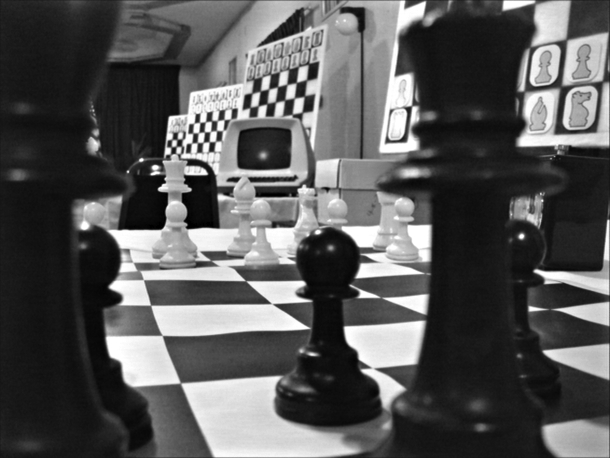 Andrew Bujalski’s latest film COMPUTER CHESS defies any genre classification: sounding a death knell for human discourse as we know it, this is simply on its own. Set in a sleazy, low class hotel in Texas at the beginning of the 80s, it features two group of humans (the computer chess group of the title and a New-Age cult meeting) and an overwhelming horde of Persian cats who seem to take over the hotel; at least at night. Whilst all the humans are awkward and geeky, the cats are full of themselves marauding the place in a quest for domination.

The fuzzy black and white of the 4:3 format (shot with a Sony video camera from the 1960s, but not in a gimmicky way, gives the film its sci-fi element: pioneers from another world, creating a an almost surreal otherworldly atmosphere  in which all three tribes vy for supremacy is both absurd and unsettling. The unintended ludicrousness of the situation engenders an atmosphere of alienation, the participants existing in their own bubbles, where words are lost as a means of communication, and emotions have yet to be invented.

The annual chess meeting has a long tradition and the winner wears a glittering crown at the end and takes on the chess Grand Master Paul Henderson, who has met a bet that he will successfully beat all computers until 1984. The players – in their thirties – are humourless and emotionally inhibited (the only female competitor, Shelly, is no different), the term ‘nerd’ could have been invented for them. The youngest of them Peter (Riester), is oblivious of Shelly, even though she gives him tame encouragement. Peter wanders into the next emotional trap when he visits an older couple in their room: they want to seduce him into a ménage-a-trois, but he literally runs away, like the frightened boy he is.

One of the programmers, Papageorge (Paige) roams the hotel at night, trying to find a room to sleep in. He is brazen in his attempts, but everyone is too polite to point this out to him. The New Age group members are very accommodating to start with (putting their fingers in freshly baked loaves of bread and “replaying” their birth to re-engage with their inner beings), but when the chess congress overruns into Monday, they insist on sharing the meeting room with them, in spite of Henderson’s loud protests: he senses their intrusion may disrupt his concentration. A unique, enigmatic, unique and innovative masterpiece. AS

COMPUTER CHESS IS on DUAL FORMAT BLU-RAY ON 20 courtesy of www.eurekavideo.co.uk | and also on MUBI