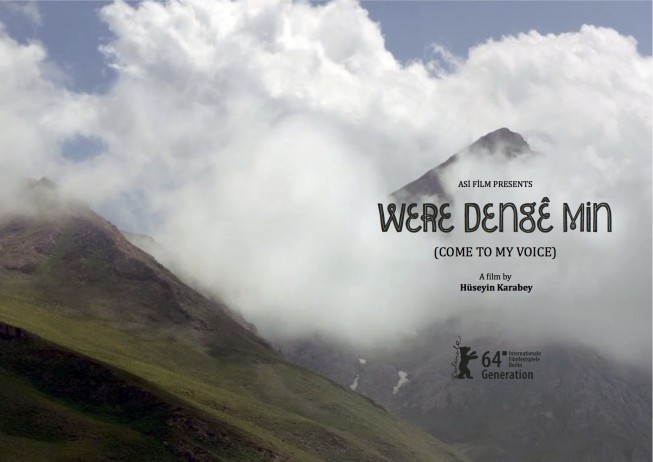 Set in the magnificent landscape near Lake Van in Southeast Turkey, Huseyin Karabey (My Marlon and Brando) tells a simple, but beautifully-crafted tale about repression, liberation and the power of storytelling. A Kurdish village is gathering around a bard, to hear the story which unfolds as the film. At the same time, Berfe (Gezer) tells her granddaughter Jiyan (Ulger) the story of the fox, who lost his tail – his pride and joy. Just when she starts talking about the many tasks the fox has to perform to regain his tail, Turkish soldiers, under the leadership of a sadistic captain, raid the village, demanding to be handed over weapons, in the village’s “secret” arsenal. But it emerges that this is ploy of a jealous informer, no weapons are found, and the men are taken to prison, among them Berfe’s son Temo (Akdemir). Soon it becomes clear, that the soldiers are looking for free weapons, in exchange for the imprisoned men, so that they can sell them for profit. Neither Jiyan’s plastic pistols nor Berfe’s father’s old rifle are deemed acceptle , and after trying her luck with a smuggler, Berfe travels with her granddaughter to the nearest city, to visit her relatives. There she steals a revolver, and with the help of travelling group of blind bards, led by Casim (Hakan), they smuggle the weapon through the many control points. When the two come home, a surprise awaits them.

Karabey’s inventive structure is fascinating, the story of the fox, told in many instalments, is a parallel story to Berfe’s struggle to find a weapon, to free her son. We can imagine, how further generations will hear the story of Berfe’s adventures with her granddaughter. This sense of history binds the villagers together, their collective memory much stronger than the blunt, simplistic and brutal approach of the Turkish soldiers. All families have either dead or imprisoned members, mistrust of the Turkish occupiers is everywhere. But the Kurds, personified by Berfe and Jiyan, use the stunning landscape to their advantage, they become a part of the wild and beautiful terrain. There are long stretches in Come to my Voice, where not a word is spoken, but the power of the images does not need much explanation, and the majority of the dialogue is short and up to the point. Anne Misselwitz’ camera is always gliding over the terrain; then, in gentle curves coming down to show the impressive faces of the actors, some like Gezer, being amateurs. A very impressive, touching but never sentimental film, which tells a rich and varied folk tale. AS