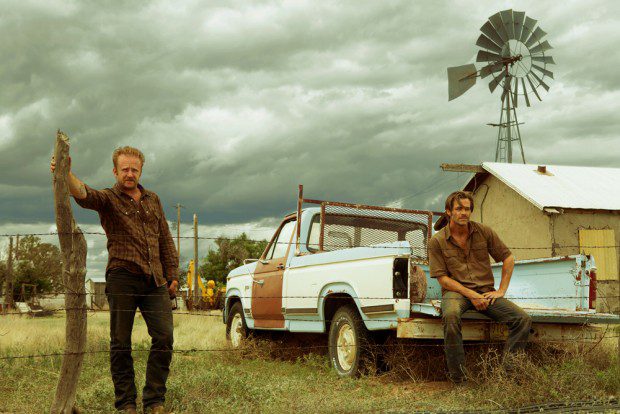 HELL OR HIGH WATER is a rangy arthouse western with a witty political undercurrent courtesy of actor turned writer Taylor Sheridan who wrote Sicario. British director David Mackenzie (Starred Up) continues to impress with a Texas-set heist led by a laconic Jeff Bridges (with an undecipherable Texan drawl) And Texas is looking a bit tired round the edges as brothers Toby and Tanner (Chris Pine and Ben Foster) embark on the dodgy business of robbing banks. The humour sparks from their cynical repartee as they go through the motions of petty crime for paltry financial gain.

Toby and Tanner get down to business early in the morning so as to steal a march on the banking staff before they are really geared up for the day. This is a high-risk business, and they only take small amounts of untraceable bills so it’s not worth the bank’s while pursuing charges. Toby, a divorcé, was very much the apple of his mother’s eye and the sole beneficiary of her will, leaving him in control of a family property on oil land which he has signed over to his kids in trust. The bank heists have become a way of life rather than a desperate need, but he still goes through the motions to support his brother Tanner, a career criminal who got nothing in the Will, so there is a kind of irony in the plotline that spikes the dark humour.

Meanwhile, the Texas Ranger Marcus (Bridges) has his eye firmly fixed on their trail through his Wayfarer sunglasses. His partner Alberto (Gil Birmingham) is a Native American and they share an affectionate relationship – this is the kind of film that doesn’t pull its punches – with some politically incorrect racial jibing – in the best possible taste. Marcus is on the verge of retiring but reticent to throw in the towel knowing that not much else awaits him but the inevitable, and the two of them  mooch around town checking in at the same old diner where the feisty old local waitress would certainly give them the cold shoulder if they went too far off the main menu selection by ordering the trout like some out-of-towner did back in 1987.

Nominated for a fistful of Oscars this is an upbeat crime thriller with some vicious dust-ups and convincing action scenes between Marcus, Toby and Tanner that feel at home in the sun-baked landscape of New Mexico and Arizona. MT