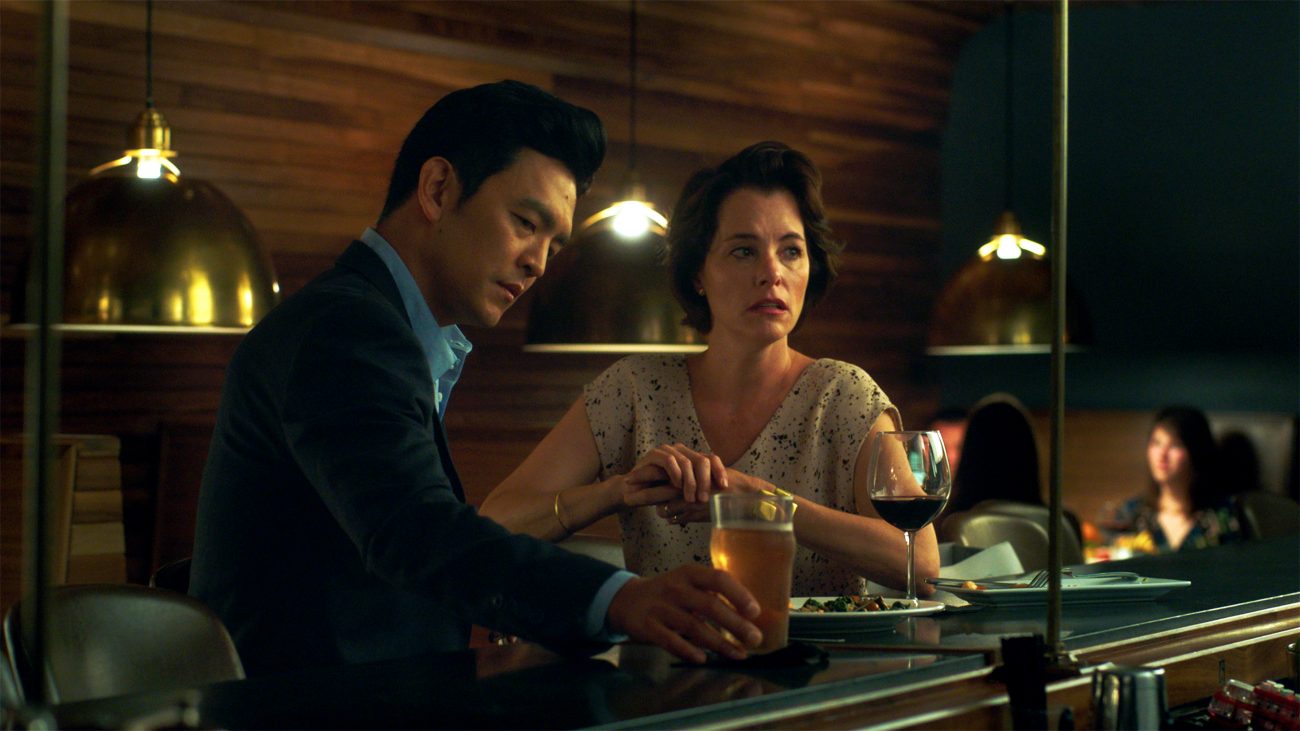 Seoul born director Kogonada is a visual artist known for his documentaries. Columbus is his visually alluring and quietly affecting debut feature exploring the human soul in crisis with great sensitivity and a transcendent feeling of stillness and calm. Set in Columbus, Indiana and underpinned by three fine performances, it is also a love letter to modernist architects Eero Saarinen, I.M. Pei and Richard Meier, whose modernist buildings lend an air of cool contemporary splendour to the bland Mid-West.

Jin (John Cho) arrives from Seoul to look after his estranged father who has suffered a stroke the night before delivering a lecture on modernist architecture. Harassed by his editor and irritated by his Korean family commitments, Jin is drawn back in to the complex world of his father’s assistant Eleanor (Posey), a crush from his younger days. To gain some perspective he wanders around the campus where he comes across Casey (Richardson) as young graduate caring for her sick mother. Casey’s friend Gabriel (Culkin), is another young man lost in a void, hiding behind great words but clinging to the past.

Kagonada makes great use of the impressive buildings and the way they elicit a subtle or profound emotional response from their human counterparts in this  unique study in psychogeography, a subject that has been tackled before in documentary form but rarely as a feature. Each shot is a complex study in how the built environment  impacts on the human element as the protagonists react sensitively to the vibes of the mainly glass-fronted structures and the spaces that surround them.

The two main protagonists seem trapped in their minds, but Casey feels liberated and inspired by some of these remarkable buildings that move her to dance, cry and sing: in this way architecture provides a means of escape from her days worrying about her mother. Jin feels unmoved by the buildings: he is a more pragmatic character but both are trapped in the security of inertia and familiar routine.

Casey uses her mother as a reason to postpone decisions about her future, and Jin blames his father’s omnipotent presence for his own underachieving, loneliness and his dysfunctional relationship with Eleanor as the narrative’s dramatic arc slowly points to a solution.

DoP Elisha Christian (In Your Eyes) creates an otherworldly reality inviting us in from the outside as the protagonists glide around aimlessly, like fish in a bowl. Sometimes the atmosphere feels eerie as the buildings take over, dominating everything with their commanding presence, dwarfing and deafening the human element. Columbus is unique in its near transcendental approach, and asks for some patience, but rewards the audience with an extraordinary experience.