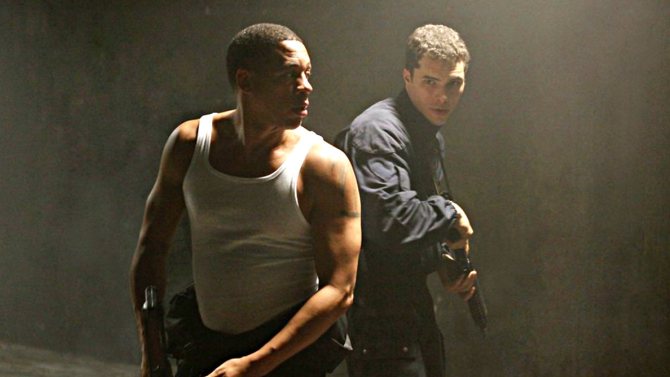 This stylishly competent Parisian crime drama is Belgian filmmaker Fabrice Du Welz’ follow up to his rather more distinguished Cannes 2014 outing Alleluia. Set under the same grey skies as its edgier predecessor, COLT 45 is chockfull of impressive set-pieces and slick shootouts but Gaspar Noe collaborator, Benôit Debie’s suberb cinematography proves rather too glamorous for Fathi Beddiar’s throwaway script and plotlines. Decent performances from its solid French cast ensure that COLT 45 slips down easily though, if you’re looking for an uncomplicated late-night watch.

A romantic undercurrent is provided by Alice Taglioni (Paris, Manhattan) and Imanol Perset (Cub) as two detectives who fall for each other when the reserved but decent junior cop is fingered for a high level shooting operation that sends him into a stratosphere that will ultimately make a man of him. Training by night with crime master Gérard Lanvin (Chavet) and rapper Joey Starr (Milo) he keeps his day job in the police armoury division, but the going gets tough at night when the rollcall of robberies and deaths among his colleagues starts to take its toll on the young sharpshooter. Du Welz struts his stuff with impressive allure but this Gallic gunslinger is not amongst his most outstanding. MT