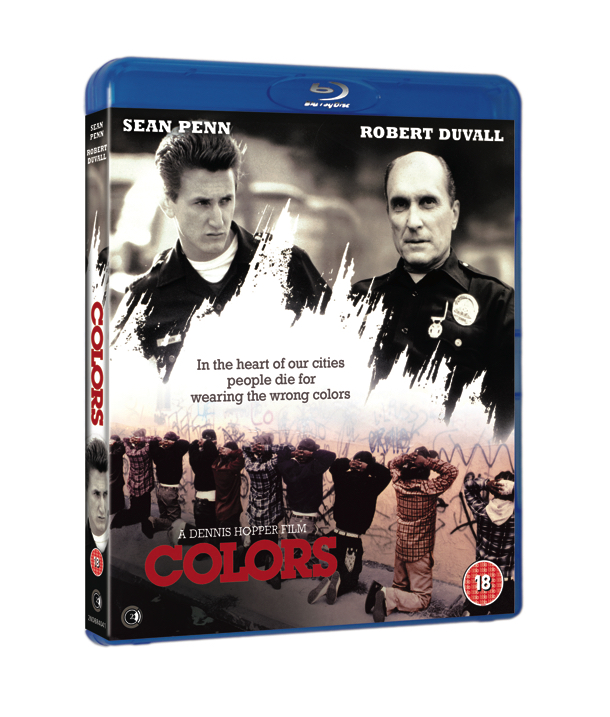 By the time he directed COLORS in 1988, Hollywood enfant terrible Dennis Hopper (1936-2010) had reached the stage of the ‘wise old man’ of Hollywood – and it shows. Hopper transferred the action from Chicago to Los Angeles and had the original script by Richard DiLello changed; even though he later admitted that had he had total control, he would have concentrated more on the interaction of the gangs, and not so much on the policemen’s story.

Experienced cop ‘Uncle’ Bob Hodges (Duvall) is paired with newcomer Danny ‘Pacman’ McGavin (Penn), to keep peace in the suburbs and barrios of the city. Three main gangs fight it out: Crips, Bloods and Barrio, the later an all Spanish gang, led by the vicious Frog (Silva). Whilst Hodges tries to stay human, McGavin thinks he knows everything and often ruins McGavin’s plans with his aggression. Finally, the Barrio’s are the last gang standing, and when Hodges arrests Frog, he is shot dead. Later we see a much more mature McGavin, patiently explaining to a black rookie the same tactics Hodges had told him. Whilst the gang violence is very realistic, the cop relationship is told in a very conservative way (Hopper’s disinterest showing). McGavin’s short relationship with the waitress Louisa (Alonso) is just an excuse for some nudity. Somehow it is difficult to believe that COLORS is the work of the director of Easy Rider and Out of the Blue. AS