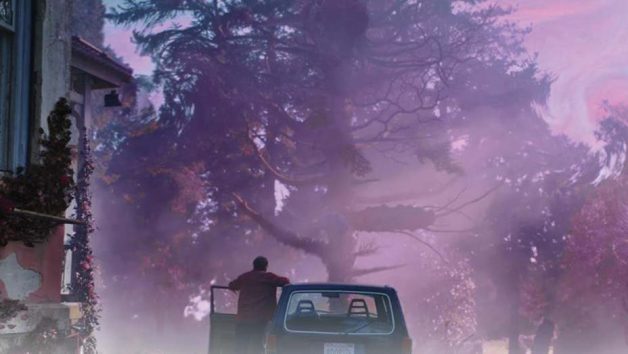 Richard Stanley adapts H P Lovecraft’s sci-fi classic with flair, bringing modern sensibilities and a stunning visual aesthetic to his latest horror outing that is faithful to the 1927 short story considered one his most popular works and his personal favourite.

The film has been adapted several times, as Die, Monster Die (1965) with Boris Karloff, The Curse (1987), Colour from the Dark (2008) and The Colour out of Space (Die Farbe) that went on to win awards at several genre festivals for its Vietnamese German director Human Vu.

After the fiasco that was The Island of Dr Moreau, it comes as a relief that Stanley’s Color Out of Space made to the big screen, the script co-written with Scarlett Amaris. It sees a family threatened by an evil alien force after a meteorite lands on their farm in steamy secluded woodland in Arkham, Massachusetts (actually Sintra, Portugal). The whole area is poisoned, crops fail and animals dying in alarming ways. Stanley’s film conveys the main thematic concerns of the novel that will resonate with adventurous audiences today: The idea of an outside force contaminating the native population, a possible metaphor for xenophobia and today’s concerns surrounding nationalism.

As the head of the family Nathan Gardner (a game Nicolas Cage) rampages through the mayhem, his usual cartoonish demeanour adding grist and dark comedy to the human terror. He is married to Joely Richardson’s Theresa who shares the same offbeat, slightly unhinged persona. We feel they could easily go off at a tangent, and we are soon proved right. Renovating an old farm house, growing vegetables and rearing alpacas is their main occupation but not their forte. Country life feels as alien to them as the meteorite that landed in their garden – but the hope its that the new environment might help Theresa’s recovery from breast cancer.

The Gardner’s youngest is Jack (Hilliard) who is also the first to be touched by ‘the color’. The elder Lavinia (Madeleine Arthur) is a bit of a one off and is also a practising Wiccan, and she is in the middle of healing Theresa when a surveyor named Ward (Elliot Knight) arrives to test the local water table. He also narrates the unfolding realisation that the meteorite is actually far more horrific than a mere ecological malfunction. Meanwhile an old hermit Ezra (Tommy Chong) think it’s all to do with Global Warming – or along those lines – looping in another contemporary theme to update the piece for modern audiences.

Color out of Space is actually quite frightening. It all looks spectacular, a psychedelic acid-trip of fizzing pastel pink, violet and putrid green that is both scary and sensational. In one scene Nathan’s arm turns scaly, in another the family dog morphs into a mutant monster. But judiciously Stanley captures our imagination by keeping some of his ideas off screen. Until the final blowout where D0P Steve Annis goes into overdrive, our senses scandalised, and not in a good way. You have been warned. MT

ON RELEASE NATIONWIDE FROM 28 FEBRUARY 2020