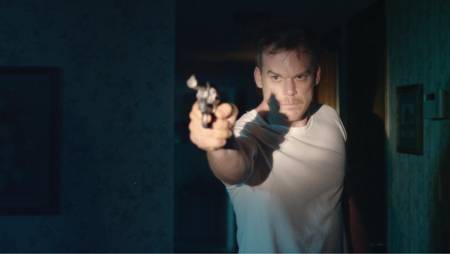 Jim Mickle (We Are What We Are) is leading the audience more than once up the garden path in this clever and intense retro-noir. Whenever we feel safe about the narrative, Mickle changes gear introducing new characters who change everything as radically as possible. It begins, very much cliché, in a small Texas town in 1989: Richard Dane (Hall), a picture framer, is woken up one night by his wife Ann (Shaw), who has heard a noise in the house. Richard loads his revolver, searching his home for an intruder and duly shoots an unarmed man in the living room. Richard, very much on the sensitive side for an archetypal Texan male of that (or any) era, is distraught, but the local Sheriff consoles him: the intruder he shot was a wanted man, a certain Freddy Russell, and Richard acted in self-defence. Nevertheless, Richard doesn’t find solace, and goes to Freddy’s funeral, where he is seemingly the only attendant. But soon he encounters Russell senior: soft-spoken but menacing, Ben Russell (Sam Shephard) reminds Richard that he too has a young son, albeit of school age.

Ben begins a cat-and-mouse game with Richard’s family and the police, but in the end is taken into custody by the sheriff. By chance Richard witnesses the policemen dragging Ben onto a railway track, injecting him with an anaesthetic and leaving him on the track, with the train approaching. Richard has to make up his mind pretty quickly, but his good side wins over and he rescues the father of his victim. They both soon find out that Freddy is still very much alive: hiding under the shield of the witness protection scheme, after having agreed to testify against the mob, for whom he had worked. Ben enlists the help of a larger-than-life army buddy, Jim Bob (Don Johnson), who is as outspoken as ready for any action coming his way – the classic Texan man. The trio finds out the sad truth, that Freddy is taking part in snuff-movies, killing prostitutes. Father Ben compares his wayward son with a dog who has to be put down or chained for life – the latter clearly no alternative for Daddy and Jim, they drag Richard into an inferno….

Nothing seems to fit in this rollercoaster of a movie, starting with the middle-class couple, fighting a day after the shooting about the choice of a new sofa, to replace the blood-soaked one. Ann is prim and only too happy to be the bait for Ben Russell, while Richard is much more afraid for his son, wanting to send his family away, till the police has caught Ben. Richard than falls under he spell of Ben and Jim, seemingly permanent on the lookout for strong characters he can follow – not at all the leading man for a Texan movie, which is synonymous with violence, of which we are served up enough – even before the slaughter house of the grand finale. Hall is convincing as the man who has to act violently because he follows his conscience, whilst everybody around him just loves violence of any form – Johnson and Shephard are enjoying themselves mightily. The camera is versatile, resting lovingly on period details like Apple Mac classics or VHS recorders, but swinging wildly into action shots, tracking and panning vividly. COLD IN JULY is impressive, very much in the Jim Thompson mould, where rather weak men are tested in the violent environment of the American underbelly, where there’s no place for them.  AS