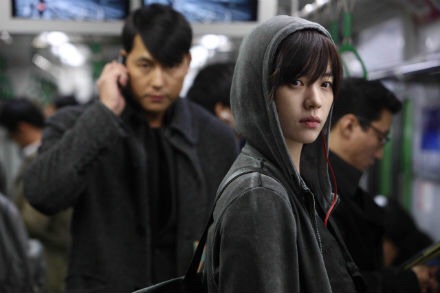 As we all know, remakes rarely match the original outing, but Cho and Kim have succeeded in re-planting one of Hong Kong’s most original crime thrillers EYE IN THE SKY from 2007 to a seedy Seoul with their COLD EYES, the original title translating simply into The Surveillants.

COLD EYES is the story of hunters and their prey. All three main protagonists are introduced in a long and rather enigmatic opening sequence set in a high-speed tube train: Tom-boy Ha Yoon-joo (Han) is muttering to herself, her fingers moving seemingly on their own will, whilst she constantly survives (and memorises) the goings-on in the carriage. Middle-aged Hwang (Sol) casts a detached eye on the proceedings: people dropping newspapers, bumping into each other, exchanging looks. Of all the people caught on camera one figure stands out: the grim-faced, soulless James (Jung) who tries to slip into the background, avoiding eye contact. The following scene, in a restaurant, at least solves the identity of two of the trio: Ha is a young police cadet, trying to qualify for Hwang’s prestigious surveillance unit. Needless to say, she passes with flying colours, even though Hwang makes sure that she can see her limits. It’s clear that boss and apprentice have much in common: in their different ways they are obsessed with surveillance work to the point of being slightly insane, having lost contact with the real world.

The unfolding narrative concentrates on the hunt for a gang of criminals led by James, who turns out to be a sadistic killer. After a bank robbery the surveillance unit follows one the participants caught on CCTV: an overweight man, given the code name “hippo” by Hwang, who has also given all his team members animal names; Ha being “Piglet”, somehow not as grand as her own proposed “Reindeer”, eventually proves her self in the impressive denouement.

There are hand-to-hand combat scenes, car chases and long, technical explicit surveillance scenes. The directors show a seemingly endless knowledge of this field. But neither this aspect, nor the fast-forward mode of the action sequences explain the fascination of the film: Ha is dominating the proceedings subtly, a brilliant mixture of vulnerability as well as mental and physical toughness. Like Hwang, she lives in a world of her own, when she is chasing her prey with a viciousness belying her frail but lean exterior. Her eyes seem to have a much more quality than the countless lenses we see in action.

COLD EYES is a playful exercise in over-kill, carried by Ha’s personality. The Seoul settings are changing constantly between the high-tech world of the city and the seediness of the districts – leaving the viewer in no doubt, how these seemingly so different environments rely on each other. Camera work is very innovative, particularly in scenes set at great height; it also gives every member of the team and James their own POV. Whilst the narrative hardly offers any surprises, Ha and the virtuosic photography make COLD EYES a superior action thriller.