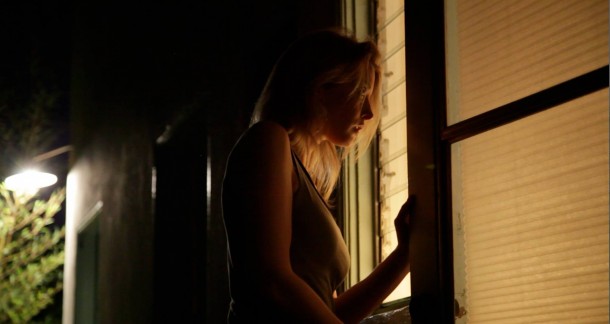 Shot on a micro-budget with handheld video cameras in the living room of first time writer/director James Ward Byrkit, this would-be “Twilight Zone” product is proof that nothing can replace talent.

Somewhere in North California, eight friends are meeting in a suburban house for a dinner party on the night a comet is in a unique constellation while passing The Earth. Fifteen minutes pass with nothing but small talk until Em (Baldoni) tells us a creepy story about the last time a comet appeared in this constellation in 1923. The lights fail and some of the group sets out to a neighbouring house, the only one left with electricity. Looking trough the windows from the outside, they see their own group dining in the stranger’s house. From then on the the story shifts into paranoia: personal and scientific. The “quantum de-coherence theory” is ‘explained’, but marital tensions interfere in the process of solving the mystery. Em, a ballet dancer who has suffered a professional setback, and her partner Kevin (Sterling) are somehow forced into the spotlight; their relationship is not helped by Kevins’s ex-girlfriend Laurie, who snogs Kevin. Not surprisingly, it is Em, who tracks down her double for a violent confrontation.

The clues are overwhelming but lead to nothing: photos of the eight, with numbers attached are found in the strange house, and their cars are attacked by strangers, glass shattered. Long lost objects are found and disappear again, and the camera tries to evoke a claustrophobic feeling, which never really materialises. Worst of all, the constant babble of conversation ruins any sense of developing fear since the protagonists are constantly analysing proceedings, any frightful occurrence is discussed and dissected in a lengthy group discussion, robbing the piece of any dramatic tension or mystery. The confrontations seem to be staged and, apart from Em, the characters are one-dimensional and to be pedestrian. COHERENCE is anything but the title suggests: a banal, overly wordy and utterly unchilling amateur production. AS

ON GENERAL RELEASE FROM 13 FEBRUARY 2015