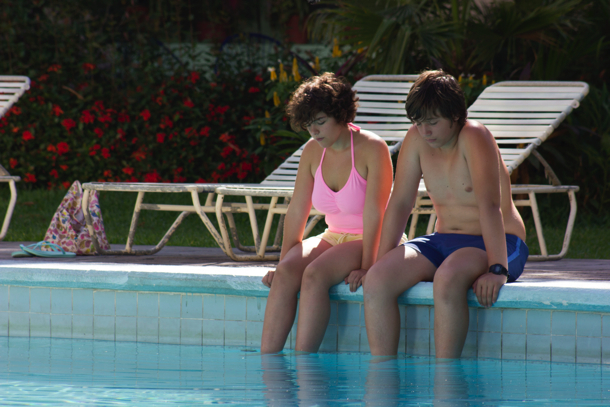 In moments of extreme intimacy, such as picking the spots on his back, single forty- something mother Paloma (Maria Renée Prudencio) also feels comfortable talking candidly about sex with Hector and re-assuring  him of his own sex appeal which highlights their obvious oedipal link. The camera observes them quietly doing nothing but chomping through the eponymous sandwiches and discussing how to prevent his incipient beard looking like ‘peach fuzz’.

For his part, Hector (Lucio Gimenez Cacho), appears to be on the brink of a sexual awakening which is fulfilled when he meets Jazmin (Danae Reynaud Romero), a slightly older girl who’s staying at the hotel with her father. Hanging out by the pool, Jazmin gives Hector a deodorant which he slathers on while secretly trying out Paloma’s bikini top later in the room, in gentle nod towards sexual experimentation.

Gradually, Paloma grows resentful as the kids pleasure each other poolside, but fails in her attempt to interrupt their time together or dissuade her son of his potential girlfriend’s worthiness: even when she criticises Jazmin’s musical taste to Hector later at night, he defends Jazmin.

This gentle shift from peaceful acquiescence to irritation is so subtle it’s hardly noticeable but it marks that dramatic point in time where a mentally healthy child moves slowly from being a ‘mummy’s boy’ to a mature adult in possession of his own masculine sexuality and it’s that transformation that makes Eimbcke’s nuanced narrative such a triumph.  A beautifully performed and enjoyable drama that will coax you into a quietly contemplative mood. MT