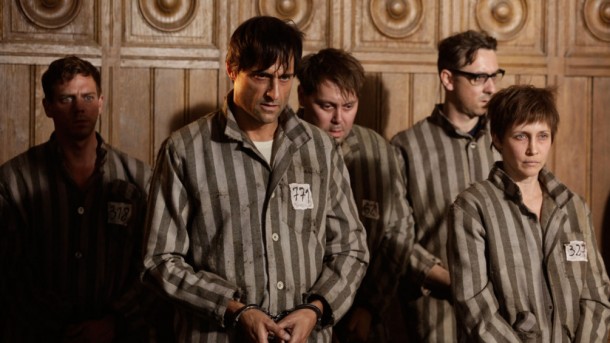 Truth is always stranger than fiction. And Nae Caranfil stretches this maxim to maximum in his black comedy about a group of convicted Jewish bank robbers effectively forced to re-enact their crime for a propaganda film in postwar Romania.

Caranfil has made several features as part of the Romanian New Wave but this attempt to go international and more commercial by having an anglophone cast, with Mark Strong and Vera Farmiga, fails to ring true largely because the leads are really supposed to be Romanian. This, along with establishing the group’s motives for committing a crime that would ultimately lead to their own deaths, is the main stumbling block of this otherwise upbeat and innocuous wartime caper, that effectively brings the early promise of the Romanian New Wave to a grinding halt.

The film opens with the crime caper which they pass off by pretending to be shooting a film. The five friends have all been resistance fighters during the Second World War and later, high ranking Communists. But after the hostilities are over, Mark Strong’s senior police officer Max Rosenthal and political scientist Alice (Vera Farmiga) find themselves in reduced circumstances both financially and socially. Rather than continue their lacklustre postwar lives in penury and ‘social purdah’, they decide to rob a bank and either go out in a blaze of glory, or live their lives with at least a few bob.

CLOSER TO THE MOON works best during the flashbacks of the Ioanid Gang with Strong masterful as the leader of the group, and Farmiga impressive and feisty as the woman trailblazer. But the fake romance that she develops with Virgil feels tonally out of place against the black comedy of the re-enactments and so does the sad interlude where Alice’s son suddenly turns up during the robbery. That said, CLOSER TO THE MOON is an impressively-mounted and good-looking film that offers reasonable entertainment as a wartime recreation of a true event. MT