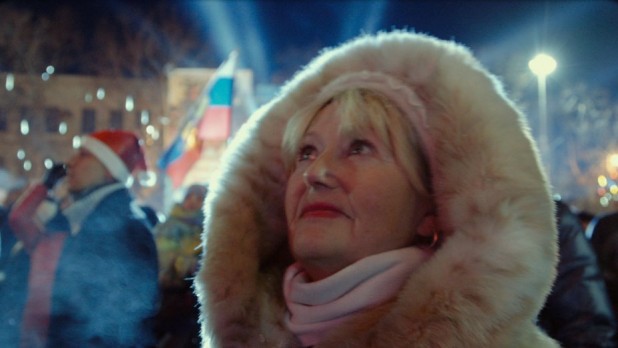 Chatting to his mother in the opening scenes of RODNYE, Ukrainian director Vitaly Mansky (Pipeline) discovers for the first time that his background is mainly Russian and that one of his grandmothers was Polish Lithuanian (Babushka Sonya), indicating that Ukraine was at one point, part of Poland. Pictured sitting in the modest flat where he grew up, and where his mother still lives in Lvov, Mansky’s relishes his humble beginnings. After leaving to study filmmaking in Moscow, he is back again due to the recent upheavals in the eegion. RODNYE explores the current climate through a series of informal vists to his close family members in Lvov, Odessa and Sevastopol (Crimea). What unfolds from their differing perspectives is a fascinating potted political history of this part of the world during the period May 2014 to October 2015. Mansky brings his usual brand of black humour to the film, and some poignant family moments into the bargain.

Juxtaposing often feisty debate with low-key domestic scenes (a stray dog adopted by his sister wanders into the picture at one point and listens intently) and personal reflections (that echo Jem Cohen’s style), Mansky offers up something much more illucidating and profound than could ever be gleaned from newspapers or TV. This multi-faceted and nuanced analysis of national identity comes with some impressive footage of everyday life along with family photos from the album.

In Sevastopol New Year’s Eve is being celebrated in Russian and Ukrainian styles. In common with most of Eastern Europe, borders have been a moveable feast since time immemorial and Mansky’s birthplace Lvov used to be Polish and before that, Lemberg, part of the Hapsburg Empire. An irrestible documentary for those interested in poltical history RODNYE offers arresting scenes of the Black Sea port of Odessa; a bride and groom floating down the famous steps that featured in Battleship Potemkin; a funeral cortege complete with Ukrainian millitary in official regalia; Spring in Kiev and Donbas in Eastern Ukraine (“Ukraine has chosen the European path at last” sighs one of his sisters); and finally – a trip to the ballet. Describing the film as his “personal tragedy” Mansky offers a moving but often conflicted portrait of contemporary life amid crisis. MT