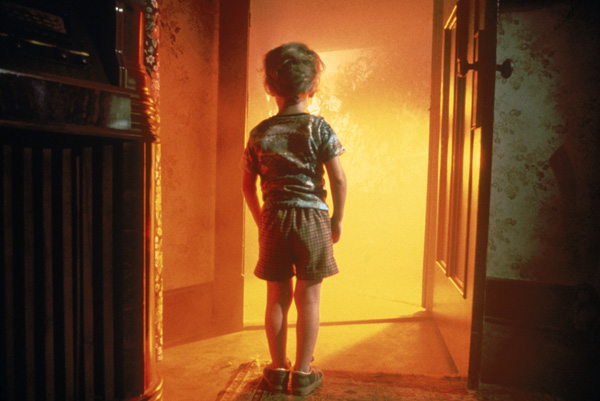 Combining scenes from both the 1977 original version and the 1980 Special Edition, Close Encounters, released in the same year as the first Star Wars film, proves that director Steven Spielberg, at 28 years old, was a child of the 1950s: Close Encounters being a compendium of SF films from his teenage years, feeding on the fears of the Cold War.

Electrician Roy Neary (Dreyfuss) encounters an UFO on the road while investigating a widespread power cut. Somehow believing that he is in secret contact with aliens, he tries to rebuild the scene of his encounter, so that he can meet them. His wife Ronnie (Garr), his three children and the whole neighbourhood is convinced that he is going mad. In a parallel narrative, four year old Cary Guffey runs away from home in the middle of the night and is picked up by a spaceship, leaving his mother Jillian (Dillon) desperate to regain her son. Roy and Jillian meet and with the help of the US military and the French scientist Claude Lacombe (Truffaut), make contact with the spaceship. Although Jillian is only too happy to be re-united with her son. Roy, whose family has left him, is overjoyed to join the aliens on their journey home.

Spielberg takes his story seriously delivering some slapstick scenes, particularly when Roy is going overboard with his quest for meeting the aliens. These creatures are rather benign yet somewhat enigmatic. After landing in a secret field in Wyoming for the final sequence, they deliver the sailors of the navy ship Cotopaxi, which is found empty in the Gobi desert, and some crew from WWII planes, before taking the grateful Roy in exchange. Spielberg’s explanations are rather diffuse, being a mixture of religious and philosophical ramblings.

The final segment in the desert is stunning, but also includes a lengthy quote from Hitchcock’s North by North West, when Roy and Jillian try to climb a mountain, very much in the manner of Eva-Marie Saint and Gary Grant. Overall, one never has the feeling that writer/director Spielberg offers his own take on SF, unlike Kubrick’s vision in 2001. Close Encounters reallt belongs to DoP Vilmos Zsigmond (who won the only Oscar of all the many nominations the film garnered), special effects supervisor Dalton Trumbull and composer John Williams.AS