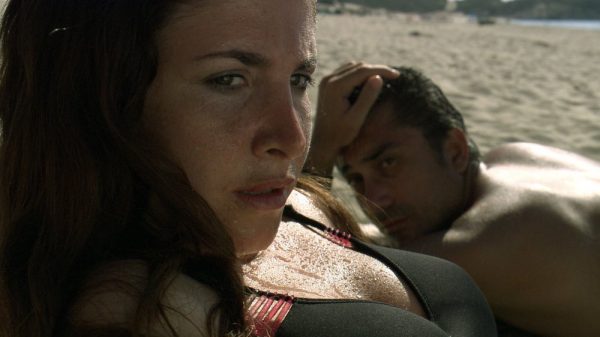 Set in a baking summer Climates is a desolate arthouse drama about the end of love. Opening with the painfully beautiful rendition of a Chopin’s piano piece (Impromptu No4)  and unfolding in three parts this is a universal tale with everlasting resonance to everyone who has felt the cold chill of loss. It stars the director and his writer wife Ebru who are first seen holidaying in the sweltering heat beside the Mediterranean their heated emotions once again reflected in the weather.

Isa is much older than his wife Bahar. A university lecturer in his forties who is clearly going through some kind of existential crisis coupled with an overly high opinion of himself. He suggests they have a break for a while but stay friends. Bahar goes along with the suggestion but we all feel the froideur of the moment as she buttons up her disappointment. After he drops the bombshell we are left contemplating the aftermath, their isolation seeping out into the beauty of the sunset and dusk. Then something melodramatic happens and we realise the abject pain Bahar has suffered at Isa’s rejection. But life goes on back in an autumnal Istanbul where Isa runs into a friend who is married to his former girlfriend Serap, a hard-edged redhead, who is nothing like the sensitive, creative Bahar. But they end up in together again and the sex is torrid but things don’t develop further.

Having had time to mull over his life the following summer sees Isa heading for the north where he happens across Bahar on a shoot for her latest film. He tries to pursue her again in a leisurely yet compulsively watchable scene on a bus where they are constantly interrupted by her crew. A deeply affecting and gut-wrenching film that says all there is to say about heartache, love and longing. MT