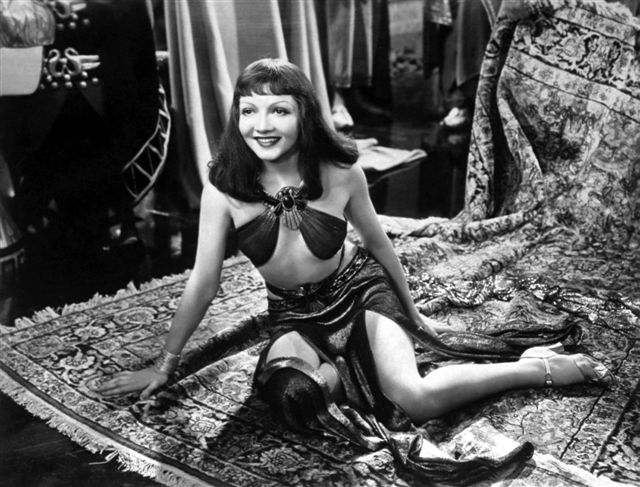 On considering screen-based Cleopatras we axiomatically recall the beautiful face of Elizabeth Taylor. That’s unfortunate as she has eclipsed the equally beautiful star Claudette Colbert, who never became as familiar a movie icon for the Queen of the Nile. Yet Colbert is sexier, funnier, often touching and more naturally in tune with the role in Cecil B. De Mille’s 1934 Cleopatra.

Colbert is a gifted comedienne displaying a lightness of touch that makes for a vulnerable and very human Cleopatra. Where Liz could be ponderous and cool, Claudette is funny, warm, engaging and seriously shrewd when required. In the film’s beautifully staged death scene, when Cleopatra picks up that snake, you really don’t want it to be clasped to her breast. Colbert has given us so much shimmering sympathy, tongue in cheek wit and attractive wilfulness. De Mille’s casting was perfect. You just don’t want her to die!

Joseph Mankiewicz took four hours to try to explain the Egyptian wonder. De Mille’s version tells her story in an economical 102 minutes: with an enchantment and craftsmanship that’s deeper than mere guilty pleasure. For one thing it’s all very well made. The lavish set design; costumes; photography and direction contribute to a pleasurable and skilfully restrained epic.

Cleopatra may be ’30s kitsch, yet it contains much that’s visually impressive. If when sensually decadent it lacks the operatic passion of a Von Sternberg or Von Stroheim (De Mille’s contemporaries) then the grand pictorialism of Cleopatra is certainly not to be sneered at. Unlike those great directors, De Mille was an unashamed Hollywood populist. There’s no vulgarity in Cleopatra (You have to wait for his last film The Ten Commandments (1956) for that to creep in.)

Of course we also have writhing female dancers in leopard skins, nubile teen girls ensnared in a fish net and Cleopatra, with her ladies, holding up her incredibly long dress. Yet such potential camp mileage is never over-exploited. For more laugh-out loud absurdity please listen to De Mille’s scriptwriters.

“You, too Brutus” cries Caesar at his death, instead of the usual “Et tu Brute.” Whilst Cleopatra’s remarks, after being released from her kidnapping to the desert, are priceless. “Is this the time to speak of Romans? I’ve had no breakfast. I’m hungry!”

As for the film’s other performers, well they range from being good to outstanding. Henry Wilcoxon (as Mark Anthony) is enthusiastic but shallow. Warren William (as Julius Caesar) is cunning and knowing. C.Aubrey Smith (as Enobarbus) is really authorative. Yet finally it is Claudette and Cecil who give us their absolute shining best in this classy, if historically inaccurate, (who cares?) production. Alan Price.