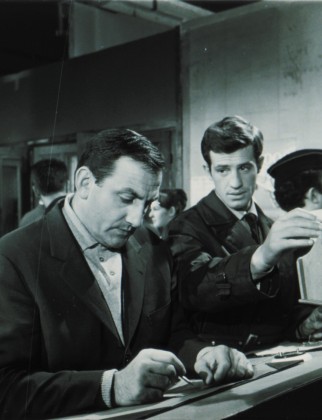 Claude Sautet is better known for his dramas Un Coeur En Hiver and Nelly and Monsieur Arnaud, but in it’s own way, Classe Tous Risques is a significant thriller of the late fifties that launched Jean Paul Belmondo, to be immediately overshadowed by his breakout hit Breathless, as the tsunami of French New Wave rolled in making him into a star after this screen debut.

Sombre in tone and impressively shot in black and white, this quietly brutal road movie with its central theme of dishonour and broken loyalty in the criminal fraternity, has Lino Venturi in the lead as Abel Davis, a square-set, hardened criminal living in Italy, who needs one last job to retire so he can take his family back home to France. And how many times have we heard that before?: he should have known better.

After losing his partner in crime (Stan Krol)  in a twist of fate as they reach the French coast, he teams up with a small time thief Eric Stark (Belmondo), who drives him to Paris.

France of the fifties is grittily depicted here and Paris takes very much a central role still recovering from the hardship of the war days. Tightly written with some witty moments helping to lift the overall mood of grim inevitability, it is accompanied by George Delerue’s atmospheric score. He went on to compose the theme tunes to A Man for All Seasons and The Day of The Jackal and has just written the soundtrack to current hit: Frances Ha.

The female characters here know their place in film noir is to be cool and simmering or proud and coquettish in support roles well-performed by Simone France as Lino’s wife Therese, Sandra Milo as Belmondo’s Liliane  and a wonderful vignette from Evelyne Ker as the daughter of Gibelin.

Classe Tous Risques was a screen adaption of the novel by real life crim, Jose Giovanni, who had worked with the French Resistance and was at one point sentenced to death. His particular experience lends a touch of grim authenticity to the piece, preventing it from drifting into cliche. If you’re looking for a solid French thriller of the old school then this will fit the bill. MT