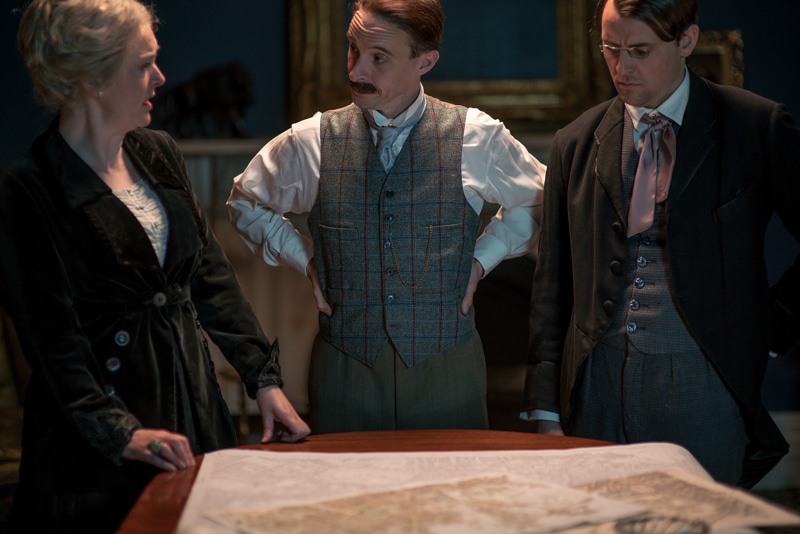 This post-modern docudrama raises the profile of controversial Irish art dealer Hugh Lane (1875-1915) and his valiant attempts to set up a modern art gallery in Dublin during the early 1900’s to house his important collection now in the London’s National Gallery. The film succeeds with a lively cast and vibrant images, but there’s simple too much going on, and many viewers may find themselves bogged down by Mark O’Halloran’s dialogue-heavy narrative of staged dramatic interludes and an overdose of verbosity from the many talking heads.

Hugh Lane was born in a suburb of Cork, the only one of many siblings fathered by the Reverend James Lane (Hagan) born in Ireland, where Hugh would perish on the Lusitania in 1915, torpedoed by German U-boots off the coast of Cork.

Educated in England and Europe where Irish culture and identity was experiencing a rebirth, Lane became fascinated by the old Masters, and then of Impressionist paintings which he felt where undervalued at the same time that French dealer, Paul Durand-Ruel was also of that opinion, and considered an important dealer, particularly of Monet, Pisarro and Renoir work, and establishing galleries in New York, Berlin and London and other centres.

Lane’s coterie admired his taste – so much so that when ne looked long and hard at paintings in exhibitions, he would drive up the prices for these so far ‘worthless’ pieces. His travels took him to Paris, and soon his Impressionist collection would make him a fortune back in Ireland, and he fought long and hard for a National Gallery in Ireland’s capital. Sadly he was defeated during his life time, only establishing the Municipal Gallery of Modern Art in 1908.

Today, ‘The Dublin City Gallery, The Hugh Lane’ houses one of the finest collections in Europe, but more than 40 of his Impressionist works now hang in the National Gallery, because Lane failed to ‘witness’ the codicil in his Will, that bequeathed the paintings – among them a Monet and a Renoir – to Ireland. Until this day the ownership fight is still ongoing: in 2008 a daring heist saw to men steal one of paintings from the National Gallery in London. The works were returned, but the perpetrators got away Scott free.

Lane enjoyed a wide circle of illustrious friends, amongst them his aunt Lady Augusta Gregory (Crotty), WB Yeats (Campion), Lord Ardlaun (Gambon), and William Orpen (Marty Rea), and staged, fictional conversations with them show him to be snobbish and egalitarian, but at the same time, convinced of his own superiority often clashing violently with the authorities. When we see him walking through the Dublin City Hall Gallery which bears his name – though he never saw it, he looks like a ghost.

O’Sullivan sometimes lets the characters speak directly to the camera, explaining their points of view, an effect which some viewers may find disconcerting. Overall, Citizen Lane is a slow burner, hampered by a torrent of interjecting experts: historians and art historians, amongst them Roy Foster, Paul Rose, Morna O’Neill and Barbara Foster, whose worthwhile and wide-ranging opinions nevertheless overload the 80 minutes running time. AS