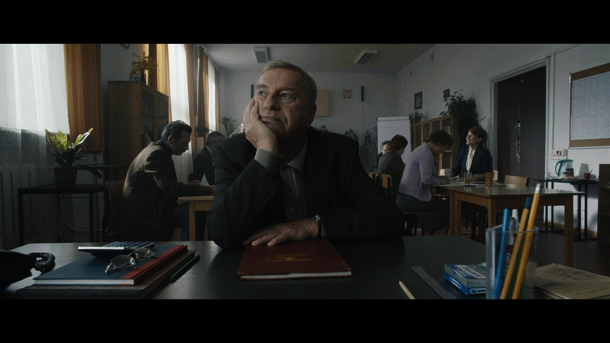 CITIZEN, a chronicle of Poland’s history since the end of WWII, is funny, absurd and extremely moving; its central character, Jan Bratek, played by two different adult actors (Majiec Stuhr and his father Jerzy), is peaceful at heart, but always gets caught in machinations not of his making. The film’s overriding merit is that it deals with ordinary anti-Semitism in contemporary Poland, a topic usually avoided in all but a few Polish films. Stuhr tries to open the debate on how Polish people reacted to the mass murder of their own citizens, and what happened to the houses and belongings of the three million murdered Polish Jews, which made up nearly ten percentage of the Polish population.

Told in non-linear flashbacks, CITIZEN is a tour-de-force of emotions, with great ensemble acting and a vigorous camera which shows the narrative out of Jan’s POV: a traumatic rollercoaster ride for an ordinary man, trapped in a society were many layers of deceit create only new lies, stating unequivocally that neither communism nor fervent nationalism will wash away a past, blocked out by the huge majority of Poles for generations.

Little Jan grows up with parents who live in a flat full of the personal affects of murdered Jews, the Silvers. Jan always questions his parents, why so many objects are named “Silver”, but never gets a satisfying answer. One day, Jan and his friends are caught insulting a Jewish stamp dealer, and Jan (who was not the ringleader), is sent by the communist authorities to join a Jewish cultural group for rehabilitation. Here he falls in love with little Anna, a relationship which will dominate all his teenage years, until Anna (Polak) emigrates to Israel. Jan’s mother, a violent anti-Semitic, making sure her son misses a planned farewell at the station. For the rest of his life, Jan will dream of Anna, no other woman will be able to replace her. From then on Jan stumbles onwards in life, always with his mother in tow. He gets arrested at a “Solidarnosc” meeting at a neighbour’s flat, after using the code “I want to borrow salt” in all sincerity. But in prison, he is not trusted by his new comrades, because they believe that he is a snitch for the government. Rescued by a psychologist (Sonia Bohosiewcz), Jan is so grateful, that he marries her – only to find out during an interrupted love making, that she is working for the Secret Police. Whilst delivering milk, Jan (Jerzy Stuhr) falls for the passionate Kazia (Arlak), who turns out to be a member of the same state organ – but resigns and finally joins a convent. After the fall of communism, Jan is offered a leading position in an openly anti-Semitic political party, but declines. His professional adventures lead him to the catholic church, but during a TV interview, he can’t even names six pillars of the catechism; a priest, trying to help him, shows the answers on a placard – alas the wrong way round; and Jan has to resign. Finally, when a big object from the roof of the Polish TV Station station falls on his head, Jan is at the wrong place at the right time: next to the Prime Minister, whose life he is supposed to have saved. His dream to become a hero is realised after all. AS