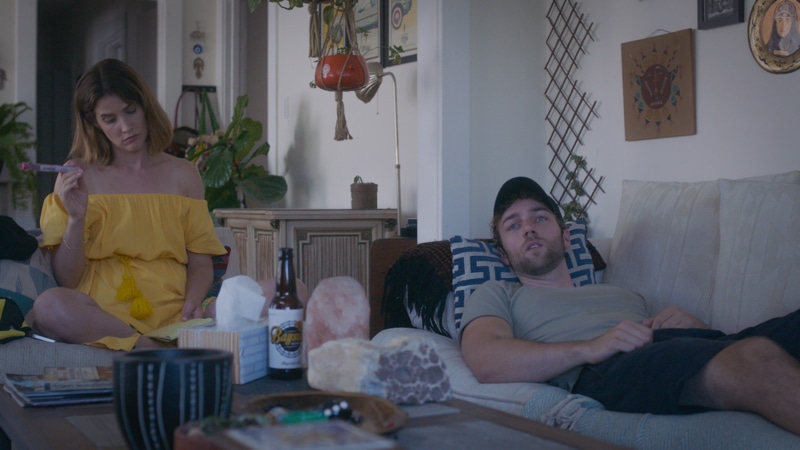 Auto-fiction can be very satisfying in feature films as well as novels, but the logo “based on a true Story” does not always guarantee the promising results anticipated. First time directors Kieran Mulcare and Matt Fifer – also the co-star, co-writer, producer and editor – have scripted reality into something which is often to pat, and looks more constructed than the authors might have wished.

New York drifter and sex addict Ben (Fifer) meets data-tech expert Sam (Brown, who also has a writing credit), gay and the only black employee in his company. Whilst Ben is only too happy to let everyone know how much in love he is, Sam is understandably more reserved about showing his emotions in public.

We are introduced to Ben’s family: his mother (Bauleo), sister Grimaldi) and church-going father (Potts) and also meet Sam’s father. These short encounters are mainly used to explain the past of the couple: Ben has been sexually assaulted as a child, and Sam nearly died, when he was shot in broad daylight. Misfiring cars bring his PTDS to the surface, whilst Ben has developed a catalogue of psycho-somatic illnesses, for which the stern doctor (Adsit) has no diagnosis. A visit to an off-beat psychiatrist (Smulders), whose dog shares the sessions, does not help Ben either. We are witness to the couple’s self-help, which is also limited, in spite of their best and long drawn-out discussions. The outside world, in from of a news commentary about the Jerry Sandusky trail (2012) does not often enough intrude into this often clumsy and over-wrought ‘Kammerspiel’.

The NY images of DoP Erich Schlicher save the feature from being a verbal slug feast: the scenes set in Washington Park Square are a poetic master-stroke. But even with a running time of only just over 90 minutes CICADA overstays its welcome: repetitions and a near pathological need to show the main protagonists in the best light, leave the audience for great parts unengaged – there are simply no barbs in this rather simplistic tale of love and coming to terms with the past. AS