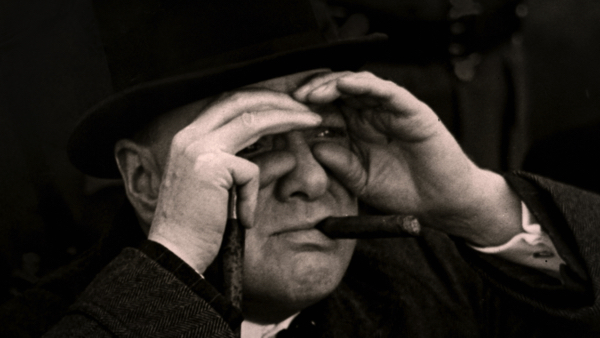 Churchill was not only a politician and writer he was also an avid film buff. And he used his knowledge of the cinema as a political tool to further Britain’s interest in the Second World War, according to this new documentary by director and writer John Fleet.

Archive footage shows how Churchill – down on his luck in the ‘wilderness years” of the early 1930s – made a fruitful alliance with a Hungarian Jew who had started life penniless but went to be one of Britain’s most celebrated film producers. Alexander Korda took Churchill on as a screenwriter and historical advisor in his production company London Films. Churchill had already honed his writing talents in books and newspapers but also proved to be creative in other ways providing script notes for Korda’s productions and an epic screenplay.

When war broke out in 1938, this politician filmmaker collaboration would be significant in bringing victory for Britain and the Allies. US support was vital in overcoming the Germans and Churchill knew a radical approach was needed. Korda by this time was wealthy on the profits of his rousing historical dramas made in Hollywood and Europe. The Academy Award-winning Private Life of Henry VIII established him on the international stage.

By 1940 Churchill was Prime Minister and appealed to his friend Korda to make a film that would boost pro-British sentiment and strengthen the resolve against Hitler. “Many Americans saw Britain as an old-fashioned imperial nation,” remarks Sir Winston’s secretary, John Peck. So Korda offered to turn the whole of Denham Film Studios’ resources over to making a propaganda movie that would screen in the US and put Britain not only on in the map but also in America’s hearts. Korda set off to Hollywood on a mission to complete his silent epic The Thief of Bagdad. While there he directed That Hamilton Woman (1941) another rousing patriotic drama based on Nelson’s sea victory, starring Laurence Olivier and Vivien Leigh – the couple of the moment both on and off the stage and screen – with spectacular results.

John Fleet makes a convincing case and a lively documentary enriched by treasures from the archives, previously undiscovered documents and photographs – including one stunner showing Americans supposedly watching the crucial film in an enormous drive-by. Informative talking heads include Stephen Fry. MT