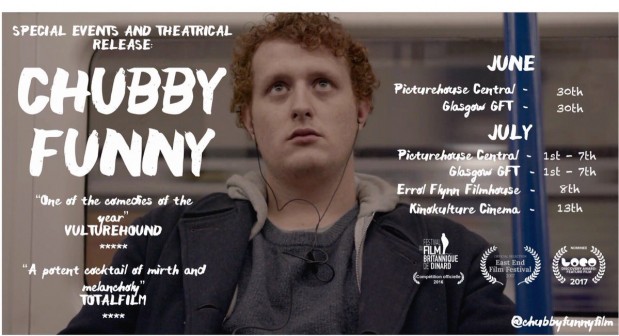 Nonchalamtly dovetailing humour with pathos, Harry Mitchell’s low budget comedy is indie filmmaking at its best. With naturalistic performances thrown in for good measure, CHUBBY FUNNY follows the freewheeling but not always light-hearted days of two aspiring actor/flatmates in London’s Primrose Hill. Oscar – played by Mitchell, who also directs – has an easygoing girlfriend (Laughland), works for a charity where he takes regular abuse on his door to door fundraising grind, while doing ridiculous chocolate adverts on the side (his agent has classified him as ‘Chubby Funny’). Meanwhile, Charlie (Augustus Prew) pays their rent and has just landed his first real acting part, paving the way for jealousy and resentment to infiltrate their relationship. As the onesie-wearing Oscar, Mitchell is a comedy natural with his slapstick insouciance and witty take on life, and there’s convincing support from Laughland, Asim Choudary’s razor-sharp shopkeeper and David Bamber as his cynical former teacher. Despite its slim storyline – nothing really happens – but somehow it all slips down rather enjoyably. With its occasional classical score, this is perceptively written, well-crafted and amusing stuff. MT