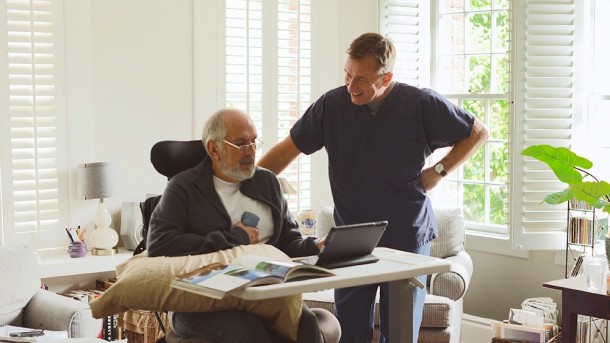 With loneliness and life expectancy increasing, Michel Franco’s third feature – a thriller entitled CHRONIC, seems entirely relevant but has deeply worrying implications. Don’t be put off by the subject-matter, the reason to see this slick psycho-drama is Tim Roth’s entrancing turn as a serial care-giver working in America. Set in an upmarket suburb of some West Coast town, Franco evokes an unsettling vibe from the opening scene where Roth, as David, appears to be watching a house from the privacy of his parked car. Franco holds this scene for just long enough for us to realise that this is not normal, bringing to mind Michael Haneke’s Hidden. David is looking after a terminally ill AIDS sufferer called Susan and this is where she lives. We first meet him, caring for her every need with an assisted shower. Smiling and serenely tolerant, David is the sort of nurse that anyone would wish for. He even attends Susan’s funeral shortly afterwards, but crucially seems evasive when her niece invites him to have coffee, claiming coldly that it wouldn’t be “appropriate”.  Chatting to some strangers in a bar he tells them about the recent death of his wife ‘Susan’ from AIDS. David has other patients, each one gives his undivided attention often staying over and relieving other carers during their shifts. Totally dedicated to their wellbeing, it then emerges that he has his own apparently tragic backstory.

To reveal anymore about David would ruin this deliciously-paced, well-mounted drama with its stylish visuals and tightly-scripted plotline, for which it won Best Screenplay at Cannes this year. Despite a rather unsatisfactory finale, CHRONIC mulls over is a minefield of thorny and complex moral dilemmas that Franco weaves into his plotline leaving us to draw our own conclusions about David, his patients and the pitfalls of all aspects of the contempo care system. CHRONIC is spine-chilling in the most subtle way possible. MT