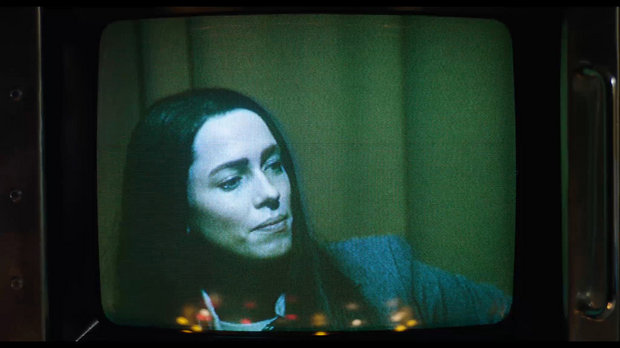 After his superb thriller, Simon Killer, Director Antonio Campos goes on to murder his biopic on newscaster Christine Chubbock, who killed herself on air in July 1974, aged just 29. This is an uneven production that doesn’t do justice to Craig Shilowich’s decent script and, despite a resonant turn from Rebecca Hall in the lead, the film is often shot like a parody of a 70s horror outing.

Christine Chubbuck (R. Hall) worked for the ABC affiliated WXLT-TV channel in Sarasota, Florida and suffered a depressive personality disorder brought on by illness and an unsuccessful love life. Living with her mother Peg (Smith Cameron), she developed strong feelings for co-worker George Peter Ryan (M.C. Hall), an Anchor at the TV station and was given the plumb job in Baltimore that Christine had yearned for. When Ryan told Christine that he was leaving Sarasota, taking with him her close friend and sports reporter of WXLT, this was the final straw for the unhappy journalist. On July 15th 1974, she read the news (even though she was employed to present her own show ‘Suncoast Digest’), and when the item about a local restaurant shooting jammed, she calmly announced “we are bringing you the latest in blood and guts and in living colour –you are going to see another first – attempted suicide”. Taking a handgun out of her bag, she calmly shot herself behind the ear. On her desk, police later found a manuscript of her last TV appearance, including a third-person account of her suicide.

Christine Chubbuck died 14 hours later in hospital. Shilowich’s narrative includes many highlights of her career, such as Chubbuck’s constant run-ins with new-director Mike Simmons (Letts), who accused her of “being a feminist, always being too loud, to drown out others”. But the way women in the workplace are treated makes Chubbuck’s point crystal clear: far from being too loud, the female employees were always at pains to soft-pedal the males, who went on to get the promotions, with Ryan a good example of macho posturing with deals were concluded over a glass of beer at the bar.

The scenes between Christine and her mother are very emotive: whilst daughter criticises mother for her flings with younger men, she still dreams of being taken out. Whilst Christine Chubbock was intellectually and professionally ahead of her times, her lack of emotional satisfaction made her fight even harder for recognition at work. So the problems at WXLT snowballed, and when she feared that she would lose even her professional identity, she gave up.

Why director Antonio Campos and DoP Joe Anderson decided on a near gothic treatment, with shadows dominating even the sober atmosphere of the TV studio, is inexplicable – surely the story of Christine Chubbuck has enough dramatic impact on its own. PD Scott Kuzio recreates the 70s communication world to a tee – with manual typewriters and huge, handheld cameras. He and lead actress, a superbly convincing  Rebecca Hall, have to overcome the director’s penchant for stylistic indulgence, which takes so much away from an otherwise perfect basic concept. AS