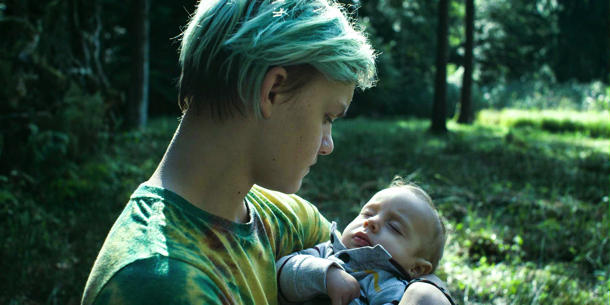 Possibly the sharpest but certainly the most violent film to come out of Switzerland since the Swiss Army Knife, CHRIEG is writer/director Simon Jaquemet’s award-winning feature debut that sees a young boy subjected to a surreal and brutal teen-hood in the Swiss German Alps.

Driving the narrative forward with merciless intensity during the first 40 minutes, Jaquemet is unable to sustain the gritty wretchedness of it all as the story  gradually unravels into a violent meltdown of European teenage trauma and machismo that will do well on the International Festival circuit and with the arthouse crowd.

Matteo (Benjamin Lutzke) is a typical confused and introverted 16 year-old who is being poorly parented by a couple of self-serving hippies; a macho, grunting father (John Leuppi) and an earthmother-type (Livia Reinhard) who has recently given him a baby brother who he is forced to ‘suckle’ in a sick and misguided attempt to get them ‘bonding’.  Matteo is understandably perplexed by the all mixed messages of his disfunctional home life and seeks brief solace in the nearby woods whence he is catapulted into an Alpine bootcamp run by another couple of nutters, Henspeter (Ernst C Sigrist) and his accomplice Anton (Ste), to toughen him up during the school hols. Whilst his family home life is emotionally unsettling, the bootcamp is physically violent and he is subjected to all sorts of humiliating treatment by the other inmates who lock him in a cage and chain him by the neck in a stomach-lurching initiation ceremony. When he finally becomes part of the gang, the drama drifts into urban territory as they trash venues in typical ‘teenage’ mode.

Lutzke won Best Actor for his raw and real portrayal of Matteo and the support cast of mostly newcomers are strong and authentic in this drama which is unusual for Swiss cinema but typical of the kind of rite of passage story you might see being trotted out in the UK, France or Belgium. These are teenagers without any heart or soul or even any particularly character development: They’re just as ‘bad’ individually and worse collectively as most gangs when left to their own devices.  That said, Lorenz Mertz’s inventive visuals give a giddy groove to the proceedings both in the Alpine locations and in town. This is a bleak and brutal portrayal of modern Swiss youth refreshingly devoid of cuckoo clocks and chocolate. MT