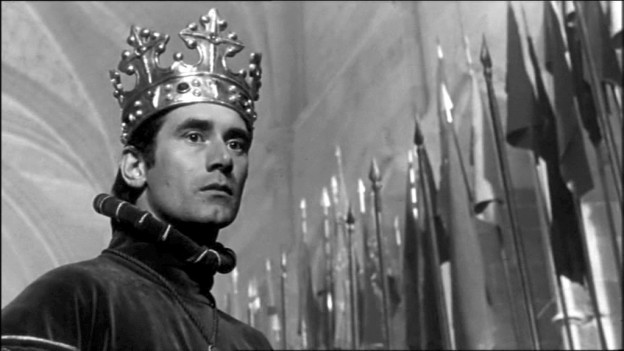 CHIMES AT MIDNIGHT is an amalgam of five Shakespeare plays: Richard II; Henry IV: Parts One and Two; Henry V and The Merry Wives of Windsor. The film’s re-ordering of selected scenes, textual cuts and a shift of narrative emphasis makes for a story more centred on Falstaff. Orson Welles gives a superb performance as Sir. John, the fat man playing an archetypal clown which morphs into a vulnerable fat man playing less of a role and more of his true self. Welles’s acting is never exaggerated and achieves a genuine pathos.

In interviews Welles called CHIMES AT MIDNIGHT  ‘a sombre comedy’. It’s certainly a remarkably disenchanted view of ‘Merrie England.’ Welles’s energetic camerawork orchestrates a kind of fall from paradise. From the early zestful scenes, with Falstaff and Hal in the ale house, their friendship is enacted like a joyful, though manipulative, dance. We move onto a grim battle, and then to some beautifully framed scenes of father/son encounters. King Henry IV’s soliloquy on sleep and Hal’s banishment of Falstaff are elegiac and mournfully lit by photographer Edmond Richard.

This embittered view of history is perfectly realised in what is now regarded as a legendary film battle sequence. I’ve watched this so many times and I always marvel at the editing, dramatic rhythm and sensual texture. Not only do we witness the savagery of war but the deaths of its beasts (how many film battle scenes show close shots of horses penetrated by arrows?). Throughout the mayhem the huge figure of Falstaff (half clad in his imprisoning armour) struts and waves his sword. This is a brilliant part-comic touch of Welles. Both Orson as director and his Falstaff creation are detached spectators, yet ultimately complicit in the staging of a futile fight, as corpse upon corpse piles up in the muddy field.

In his early films Welles brought a Shakespearean grandeur to his tragically flawed heroes. Yet sometimes they growled, and anguished, with too much self-conscious rhetoric; not so much losing the plot but our full attention and sympathy. But his Falstaff is the most human and touching of Welles’s creations. With nothing to prove, he simply tries to be a good child-like man.

Welles has made some great films: Citizen Kane, the first half of The Magnificent Ambersons, Touch of Evil and Othello, yet you can argue that sometimes their visual magnificence can be a little distracting. He was undoubtedly a master director, but perhaps rarely let go enough to show that he cared. The relaxation of Welles’s egotistical energy into a project that allowed him a profound classical simplicity, is fully apparent in his masterpiece CHIMES AT MIDNIGHT. Alan Price.

THIS 50TH ANNIVERSARY EDITION IS ON RELEASE AT SELECTED CINEMAS FROM 1 MAY 2015  MARKING THE CENTENARY OF ORSON WELLES | BFI celebrates a season of his films during July and August including MAGICIAN: The Astonishing Life and Work of Orson Welles (2014)