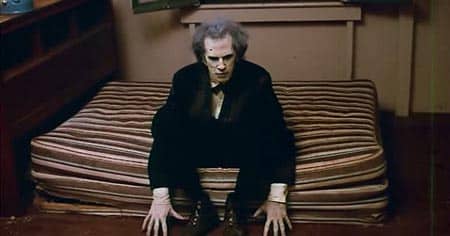 A bunch of hippies learn the hard way to sow some respect for the dead in this cross between an episode of ‘Scooby Doo’ and The Blair Witch Project played for laughs with the production values of Tobe Hooper’s The Texas Chainsaw Massacre.

This no-budget lark shot in Florida directed by ‘Benjamin’ (as he was then billed) Clark sure delivers the goods. The atonal score by Carl Zittrer frequently sounds more like sound effects than music and art director David Trimble (not that one, I hope) adds to the levity by putting his surname on a tombstone.

The usual bunch of hippies are an engaging bunch, particularly feisty Valerie Mamches and wide-eyed Anya Ormsby. The climax when it finally comes doesn’t disappoint you when it erupts (SPOILER COMING:) into a wondrous pastiche of Night of the Living Dead.