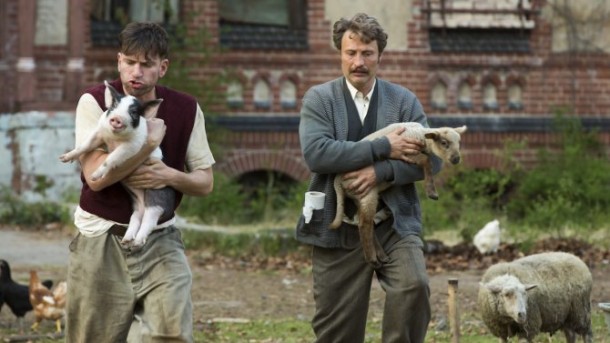 Anders Thomas Jensen is best known for strong storytelling and screenwriting both in his native Denmark (Brothers | In a Better World) and the UK (The Duchess | Love is All You Need). His latest film is almost impossible to define: a lyrical blend of tragicomedy, fantasy and horror with dynamic performances from the best of Denmark’s acting talent all go to make this film an unforgettable experience in tonal weirdness. CHICKEN & MEN is best described as a grotesque Danish version of the BBC’s League of Gentlemen with undertones of Cold Comfort Farm.

Family dysfunction is at the core of a story set in the glorious island seascapes of Ork (the Danish isle of Fyn) where three retarded and cleft-paletted half-brothers (Franz (Soren Malling), Gregor (Nikolaj Lie Kaas) and Josef (Nicolas Bro) occupy the rambling stately ruins of a manor house (Beelitz, Brandenburg Germany) overrun with a range of hybrid farm animals (some alive, some preserved in formaldehyde) adding a twist of quirkiness to its Gothic splendour. The film opens as two other ‘brothers’ Elias and Gabriel (Mikkelsen and Dencik) arrive on the estate having found out from their dying adoptive father, that their birth father, an eccentric scientist, is still living in the stately pile.

From this bizarre narrative, a strangely philosophical parable emerges which is by turns hilarious, macabre, romantic and even tender in its fairytale pretensions. Mads Mikkelsen swaps his signature sexual allure for one of sad sexual disfunction in a role that is gruesome and at times even demeaning: rocking brassy curls and a lopsided grin, his strange affliction forces him to wank involuntarily every time he comes into contact with a woman. The ‘maguffin’ here is a well-used role of loo paper. Each character gives a nunaced interpretation of madness and physical deformity that keeps us entertained and intrigued in disbelief and horror. At the end Gabriel is the brain behind the brothers delivering the philosophical thread that weaves the story together giving it a meaningful integrity. Bak and Kaas’ sweepingly romantic score elevates the film in a poetic way and combined with Sebastian Blenkov’s wildly bucolic cinematography MEN & CHICKEN is both entertaining and memorable whether you buy into its grotesque humour or not.MT