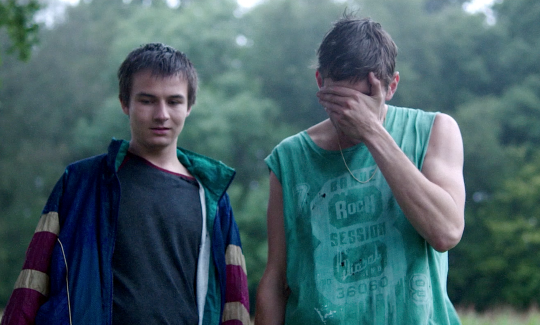 First time feature film director Joe Stephenson, who has a track record of TV films, has set this drama CHICKEN in the countryside, creating an eerie, enigmatic atmosphere, but failing to fashion a believable narrative from Chris New’s script, based on the play by Freddie Machin. If that sounds familiar, it is a criticism levelled at many UK productions in recent years that look fabulous and feature strong performances, but fall apart on the narrative front.

Fifteen your old Richard (Chambers) suffers from impaired fine motor skills and severe learning difficulties which make schooling impossible. So he is living with his borderline psychotic brother Polly (Watkins) in a dilapidated caravan. Richard’s main interest in life is his chicken Fiona, and all his love is lavished on this feathered friend.  When a couple of new landowners with their daughter Annabelle (Paige) move into the nearby country house, they cut off the electricity to the caravan, hoping the unwanted squatters will move on. Polly, who earns a meagre living as a casual labourer, takes the hint as is only too glad of the opportunity to leave his brother behind – with disastrous consequences for all concerned.

Sadly CHICKEN doesn’t appear to live in the modern world. There are too many plotholes and contradictions in the narrative. Nowadays, two brothers with such inadequate survival skills would have certainly being taken care of by Social Security. But, even more crucially, an intelligent and attractive teenager like Annabelle would hardly pair up with pubescent boy suffering from Richard’s severe impairments. Finally, given Annabelle’s poor relationship with her mother, it is unlikely that her mother would offer to accommodate such a problematic teenager such as Richard, into the bargain. The botched ending, however poetic, leaves the audience even more puzzled. When choosing social realism as a genre, one simply cannot disregard the simplest psychological and social facts. Chambers performance is impressive, his real age of twenty-five makes the narrative even more unrealistic, since he looks exactly the same age as his brother (Watkins.) DoP Eben Bolter does a great job in creating a haunting atmosphere, but his efforts are wasted on this infuriating incomprehensible feature. AS