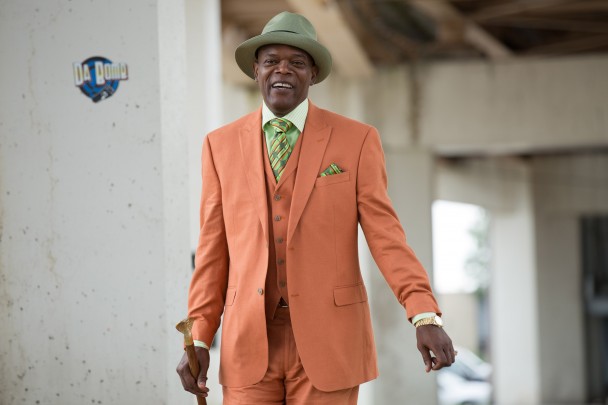 Director/co-writer Spike Lee (Do the Right Thing) seems to be getting more and more angry as he gets older. Whilst the reasons are obvious, and we did not need a triumphant Trump for proof, Lee’s method of translating his rage in Chi-Raq (as in may of his other films) is hardly helping a reasonable discussion about the social woes of the United States. Chi-Raq (the first major production of Amazon Studios) is an overblown numbers revue, a re-setting of Aristophanes Lysistrata in Chicago’s notorious Southside and a sort of hip-hop musical.

Lysistrata (Parris) is living with her lover Demetrius Dupree alias Chi-Raq (an amalgamation of Chicago and Iraq), the gang leader of the purple clad Spartans, in Chicago’s Englewood district. Their sworn enemies are the Trojans, led by Wesley Snipes (with an eye patch) as Cyclos. As in reality, the gang warfare has claimed more victims in Chicago than the Afghanistan and Iraq conflicts combined. After the death of a baby-girl called Patti in a shoot-out between the gangs (most perpetrators and victims are black), Lysistrata, with the help of her wise neighbour Miss Helen (Basset) and her many sexy girl friends, organises a sex boycott: the men of both gangs have to give up their weapons, to gain access to their bedrooms again. With the help of preacher Mike Corridan (Cusack), Lygistrata organises the withdrawal action (No peace, no pussy), supported by a big chorus and Dolmedes (Jackson), who comments the action like a ringmaster.

Chi-Raq immediately sets the tone with its opening number “Pray 4 My City”, a raucous chorus. From then on, Lee hammers home his message, borrowing shamelessly from West Side Story, Patton and Dr. Strangelove, among others. Yes, this is supposed to be satire, but the numbers are so overblown, that they are more caricature than critique. Particularly the contrived ending underlines that form has overtaken content to a degree that the aesthetics have swamped the critical aspect of the film. Furthermore, Lee, like many others, does not seem to recognise the obvious: that the free availability of weapons and the billion Dollar profits of the industry are the true reasons for the killings. With its running time of more than two hours and its uneven narrative, Chi-Raq loses the audience at the end, when one gag after another tries to outdo its predecessor. DoP Matthew Libatique images dominate the proceedings, his choreography is truly marvellous – but help to suffocate the message. The cast, obviously having fun, is brilliant, particularly Teyonah Parris, who dominates the proceedings. What a shame that script and structure let everyone down. AS

NOW ON GENERAL RELEASE FROM