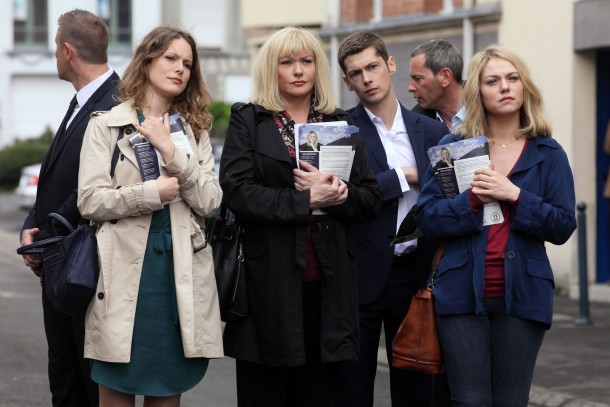 Belgium director/co-writer Lucas Belvaux has chronicled a local election campaign in the north of France, with similarities to the real world very much intended. Set in a unnamed town close to Henin-Beaumont in the Pas-de Calais region, where Marine Le Pen was elected as MP in June, after having been thoroughly defeated in the preceding presidential elections, Chez Nous is centred around a a-political community nurse, who is exploited by a far right Party called RNP.

Pauline Duhez (Dequenne) an over-worked community nurse, divorced with two little children, who has to watch, how her patients and most of the townsfolk are suffering from a permanent reduction of their living standard. Whilst her father Jacques (Descamps), is a fierce trade unionist, Pauline is susceptible towards populist right wingers, like Dr. Berthier (Dussollier), the local doctor, who looked after Pauline’s mother, who died of cancer. Berthier is a gentlemanlike neo-fascist, in the mould of Tixier-Vignancour, who was Minister in the Vichy regime, and collaborated with right-wing militias after the war. Berthier has now left military resistance behind, and helps the RNP (Renewed National Party) to gain power in a democratic way. This cannot be said for his erstwhile friend Stephane ‘Stanko’ (Gouix), who is still working for the military wing of the RNP. He was the first love of Pauline at college, and when he re-appears in her life, old feelings resurface. After Pauline agrees to be the RBN candidate for mayor of the town, Berthier warns ‘Stanko’ to leave Pauline alone: the party cannot afford a scandal, if it becomes public that Pauline has relationship with a para-military soldier. Whilst old friends warn Pauline off he engagement and candidature, ‘Stanko’ is ready to sacrifice his relationship with Pauline for the good of the party. But Pauline, who has doubts, confronts Berthier and stands down. She chooses a life with Stanko, who lies to her, that he is a changed man, who has left the armed struggle behind.

CHEZ NOUS is full of ironies: the daughter chooses the opposite end of politics from her father, her lover is really more dangerous than the Doctor, whom she rejects in the end, and the RNP has difficulties in getting rid of old fighters, who still use force. Pauline, politically naïve, is lost among the scheming politicians, particularly Agnes Dorelle (Jacob), the Party leader, who appeals to Pauline’s feminism. A late twist also helps to bring some loose ends together.
Most of the characters are based on figures of the crime novel Le Bloc (2011) written by co-author Jerome Leroy. This helps to keep the protagonists very earthy: in spite of the topic, politics are secondary; Belvaux concentrates on the motives and personalities of the participants. Some dry humour also helps, and Dequenne is particularly convincing. DoP Pierric Gantelmi d’Ille, who worked with Belvaux on Pas son Genre, captures the provincial atmosphere brilliantly, creating a feeling not unlike a Simenon novel. AS