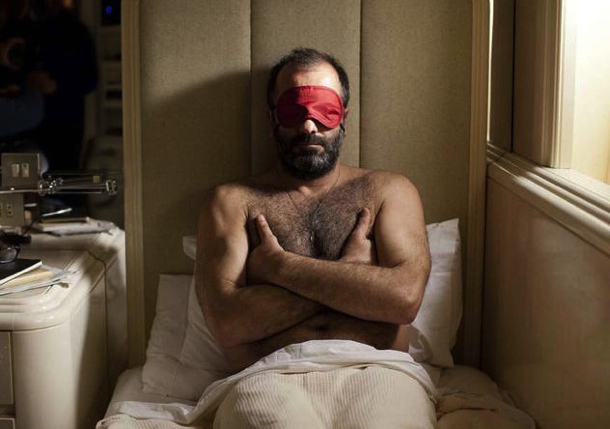 If you didn’t get the humour in Athina Rachel Tsangari’s first Weird Wave outing Attenberg, you’re unlikely to appreciate the subtlety of her indie follow-up, CHEVALIER, voted Best Film at the London Film Festival this year, by a jury whose president, Pawel Pawlikowski, took the trophy last year for IDA, and won the foreign language Oscar.

A tribute to male competitiveness, CHEVALIER is a sparky and sophisticated affair that takes place on a wintry out-of-season yacht trip where six well-off men attempt to get ‘one up’ on each other over a pivotal few days on the Aegean. The one-upmanship revolves around a game. And the game is called ‘Chevalier’, named after the signet ring worn by French noblemen. By the end of the voyage, the winner of the game will get to wear the so-called Chevalier ring on his little finger, although the narrative gradually sails into more eclectic waters.

Tsangari’s usual collaborator Yorgos Lanthimos was away making The Lobster,  but she works again with their co-writer Efthimis Filippou in a narrative that concentrates on male dominance rather than female submission, as was the case in Attenberg. The men on board all vary in age, attractiveness and kudos. ‘The Doctor” (Yorgos Kentros) is clearly the most distinguished and urbane of the motley crew, he is also the owner of the critical ring. The youngest and least bankable is the pudgy Dimitris (Makis Papdimitriou) who has been brought along by his older brother, Yannis (Yorgos Pirpassopoulos) who threatens to reveal his fear of sleeping alone if he misbehaves. Yannis also happens to be the Doctor’s son-in-law, so is on his best behaviour; the suave Christos (Sakis Rouvas) is the best looking. Josef Nikolaou (Vangelis Mourikis) and Yorgos (Panos Koronis, from Before Midnight) are long-term colleagues.

Once holed-up ‘at leisure’ in the yacht with diving trips and boozy lunches to enjoy, certain patterns of behaviour start to emerge in the name of the game. The men spar and vy for superiority indulging in playful and, at times, more more ribald banter that occasionally verges on the hilarious, particularly when Dimitris does an on-deck rendition of Minnie Ripperton’s “Lovin You`’ complete with girlie high-pitched voice. The ultimate aim here is to establish who is the best at everything rather than in one thing in particular – ‘primus inter pares’ style. Challenges also include who is the ‘most loved’ on the home front – requiring the men to engage in hands-free phone calls in front of the others. There is even an ‘erection contest’ in this  male-bonding (aka  competitiveness) routine. The winner is thankfully never revealed.

For a film that takes place by the sea, the colour palette is refreshingly devoid of azure blues and dazzling turquoise: instead Tsangari has chosen a chic taupe, teal and gunmetal aesthetic which compliments this recherché masculine set-to. D.oP Thimios Bakatatakis does his best to frame and photograph within the claustrophobic confines of tight spaces to great effect, given the equally tight budget. And in the end, the individual tasks are not taken that seriously; they are simply representative of the male ego and what it is prepared to undergo and tolerate within the parameters of the game, however outlandish or absurd. At times, there are echoes here of Eddie Waring’s “It’s a Knockout”. Spot Greece’s answer to Keith Chegwin and you’ll enter the spirit of this clever satire. MT