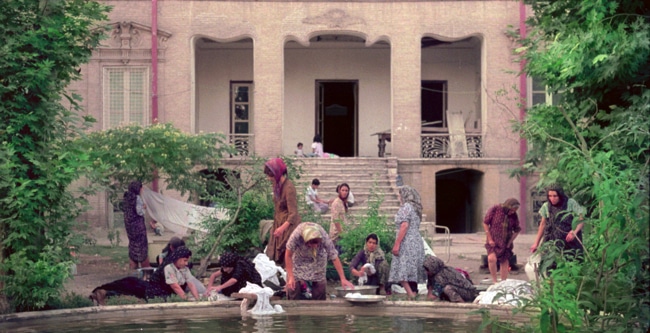 The Iranian filmmaker Reza Aslani, now seventy-six years old, never thought he would see his first feature again. But like the filmmaker himself it has aged extremely well, and become a cult classic ripe for revisiting.

Aslani was only thirty-three when Chess premiered in Tehran in the presence of Shah Pahlavi.  A second showing played to an empty auditorium, proof that the negative reviews had sone their job. And Chess did not appeal to the religious fanatics who took over the country in 1979 – they objected to strong female leads and a sexual relationship between two women. Aslani, whose third feature The Green Fire was completed in 2008, had given up on ever finding his lost masterpiece again.

Aslani’s daughter Gita Aslani Sharestani had not given up. Working as a film historian in Paris with a PhD focusing on Iranian auteurs, and began a search for the lost reels with her brother Amin. In 1973 a couple of cans of film turned up in a junk  shop. Inside was the precious film which he smuggled to Paris, so father and daughter could begin the painstaking work of restoration.

Chess of the Wind takes us back to the final years of the Qajar dynasty (1789-1925) a time where the Socialist Soviet Republic of Iran had come to power for a brief reign. The death of a wealthy matriarch leads to a power struggle between her young paraplegic heiress (Korvash, chained to a wheelchair) and her stepfather, nephews and the local commissar. The only support she has is from her handmaid (Aghdashloo), and the two women become very close. Long candlelit dinners bring to mind Barry Lyndon, but the overall mood is strictly Visconti’s La Caduta Degli Dei, with act three akin to Knives Out, as an”Upstairs Downstairs” tussle emerges. The finale is abject horror, Aslani’s prophecy echoing in our ears: “competition in increasingly worldly gains diverts you. Until you visit the graveyards”.

This lushly mounted decadent period piece is lensed to smouldering perfection by Houshang Baharlou: The painterly frames more vivid than the moribund characters who hover around like exhausted ghosts recalling the Salina Clan in Visconti’s Il Gattopardo, after their arrival in Donnafugata. Sheyda Gharachedhaghi’s haunting score blends classical Iranian music and a-tonal jazz. A chorus of washerwomen completes the spectacular but doom laden ensemble.

Meanwhile Aslani is delighted to be “re-united with his baby”, and has not given up the hope for a forth feature: he has been writing the script for the past ten years. Bring in on. AS