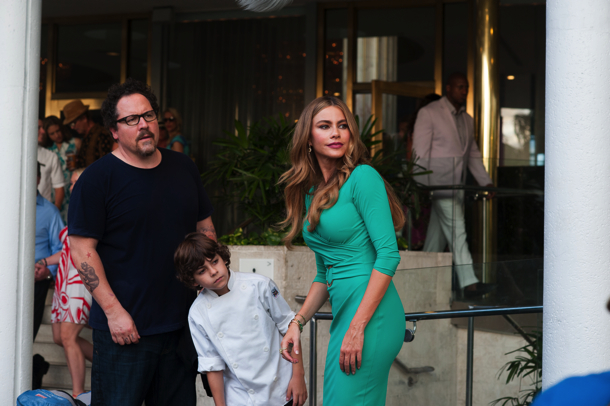 Jon Favreau (Iron Man, Swingers) returns to his indie roots with this lip-smacking romp around America that’s enjoyable and informative in content despite its predictable storyline. Did you know that there are 50 styles of barbecue; how to prepare Texas-style beef or make the best Cuban sandwich?  Well in Chef you can find out. Wrapped inside the delicious gourmet coating is a tender-hearted rites of passage success story of how one man gets the show back on the road family-wise while kick-starting his career – most of all its about being true to yourself.

According to Jon Favreau, an affable bon viveur whose generous proportions and sunny personality light up every scene (as the chef in question) the script ‘wrote itself’. While not most inventive story but certainly one that guarantees a level of truth and authenticity mixed in with the enjoyment of the subject-matter and its dynamite delivery. Akin to chomping through the juiciest flame-grilled hamburger in the Ritz, it’s competent and enjoyable with no surprises.

His acting chops are unquestionable as Carl Casper, a respected head cook at a celebrity Los Angeles restaurant who starts to feel cheesed-off with the restrictive menu imposed on him by crusty owner Riva (Dustin Hoffmann). Despite the dulcet support of Scarlett Johansson’s luscious Maitre D Molly, Casper is unhappy and an unfulfilled man makes a bad partner. But when award-winning and influential restaurant critic Ramsey Michel (Oliver Platt) openly lambasts his cooking as being tired and turgid, Caspar decides its time to make some creative changes. Luckily his intelligent 10-year-old Percy (newcomer Emjay Anthony ) discovers the power of the critic’s Twitter following (running into the thousands); he sets up an account for his father which proves disastrously counter-productive causing him to make a gracious yet powerful exit from the restaurant and out into the cold.

At this point it always helps to have a rich and beautiful ex-wife and the gorgeous Sofia Vergara is wheeled in as Inez to sooth the troubled waters by taking Percy and Caspar with her on a business trip to Miami. It feels like she still holds a candle for her ex and the ulterior motive is to oil the wheels of creativity and romance – a double-edged sword. And so begins a food-fueled road movie with overtones of boyish bonding and undertones of a flirty romance.

With its rousing soundtrack and magnificent views of California, Florida,Texas and Louisiana this is an indie film with big-hearted ambitions and some enjoyable performances from the star-thronged cast. Although Scarlett Johansson feels under-utilised in her small role, there’s something genuine and heartfelt at the core of Jon Favreau with its upbeat and universal message of hope that leaves the audience satisfied, yet raring to eat. MT