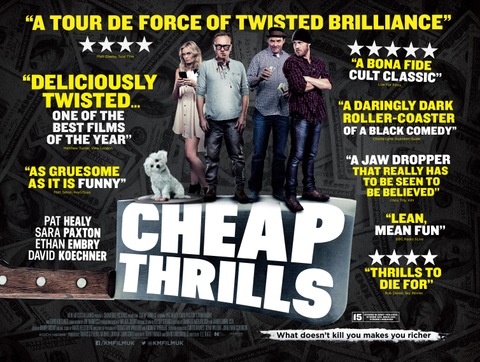 There’s something utterly despicable about E. I. Katz’s indie thriller CHEAP THRILLS.  Its message is nothing new -that money talks; but it’s method: – just how powerfully it talks; takes the genre to a new low.  And don’t take that in a negative way: the unmitigated mood of depravity will certainly devide audiences but the performances, script and direction are admirable.  Indeed, the film won both the SXSW’s Audience Award and the Best First Feature prize at the festival, leaving viewers speechless or appalled.  But the content is more suggestively violent and cruel than abjectly blood-soaked: although we do have to experience some bloody noses and a severed finger. It may even garner cult appeal amongst arthouse audiences who admired the recent films of Lars Von Trier. It even has shades of Michael Haneke’s Funny Games: Katz’s version is cruder and more basic, but has the same psychological implications and mind-games.

Pat Healy stars as Craig, a wannabe writer, who is made redundant from his job as a mechanic just as his wife loses her job and the rent is due. With a young baby to support, Craig is desperate. While drowning his sorrows over a drink in the local, he bumps into an old friend in the shape of Ethan Embry (as Vince).  The drinking buddies are then befriended by a married couple who are celebrating a birthday. They have admired the bored-looking wife Violet (Sara Paxton) but the husband Colin (David Koechner) seems to have money to burn, and is keen to impress his wife and new pals with a $300 bottle of Tequila. Colin then starts a game of ‘dare’.  He offers the men $500 dollars to get a woman at the bar to slap them – Vince duly wins the game – but it doesn’t end there.  Soon the foursome find themselves at Colin’s ‘crib’ and the dares escalates out of all proportion. But this is where it also turns nasty. Soon, the old friends are pitted against each other, exposing their worst defects in a dehumanising psychological battle of wills, as petty grievances and feelings from the past laid bare. Both men are down on their luck and willing to do almost anything for money. But Craig seems prepared to sacrifice a friendship for the sake of his wife and child. Vince is more loyal as a friend: although he resents Craig’s better start in life, he ultimately appears to value his relationship with Craig above money when the chips are down.  Craig has his family to think of, but conversely, some men will kill their wives for money too.  Koechner is magnificent as the coaxing psychopath: calm and collected as he bribes the men dispassionately to the last. Sara Paxton is a cypher – morally ambivalent and emotionally vacant, complicit with her husband in some sort of private sexual game. And this is a game that proves to be dangerously addictive for all concerned.  MT

CHEAP THRILLS IS ON GENERAL RELEASE FROM 6 JUNE 2014