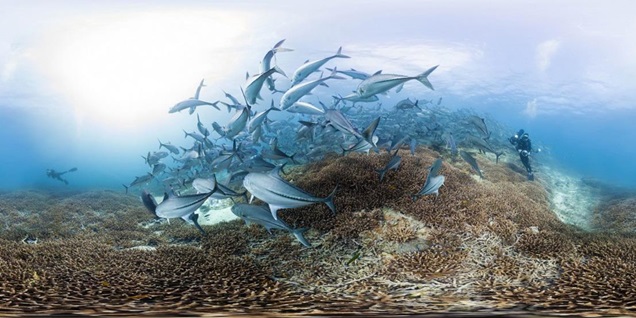 After his resounding success with Chasing Ice (2012) that examines the dwindling state of arctic glaciers, CHASING CORAL is another resonant and vital eco-documentary that tracks the destruction of the ocean’s most vital ecosystem due to the warming effect of climate change.

Coral is a not just underwater flora undulating in beautiful gardens on the ocean bed, it is a complex organism that serves both as a food factory and a habitat for all marine life. Without coral the oceans will die: it is as important as bees and trees on dry land. Building a solid skeleton structure, coral creates its own architectural environment, attracting fish and orgnanisms to live there, much in the same way as our towns provide the infrastructure for human existence. Coral also provides the basis for many life-saving drugs – but all this could come to an end if the sea temperature keeps rising, even by one or two degrees. The ocean needs to maintain a regular temperature or, just like the human body, it will become sick and eventually die.

A team set up by former adman Richard Vevers begins an earnest attempt to chart the ailing coral reefs, eventually hiring professional cinematographers to chart the extent of the problem, monitoring the alarming rate at which the coral is affected by warmer temperatures. Brightly coloured coral reefs turn a ghostly white, known as bleaching, then rapidly decay to a dullish brown mush strewn with algae. So dramatic is this state of affairs that the Great Barrier Reef will be a thing of the past within less than two decades. Occasionally, the coral takes on a fluorescent hue of bright green, purple or blue. This is coral’s attempt to produce its own sunscreen, and signals the desperate last stages before inevitable death and decay.

Despite its tragic message – that coral could be wiped out within 30 years – this is filmic and beautifully made documentary that tracks the disappearance of coral all over the world, thanks to a team of keen volunteers. We also meet Australian biologist and photographer John “Charlie” Veron, who has been filming coral since the 1970s, when it was still flourishing all over the world. In order to save the planet Humans need to stop burning fossil fuels that provide heat that the earth and oceans reabsorb. MT