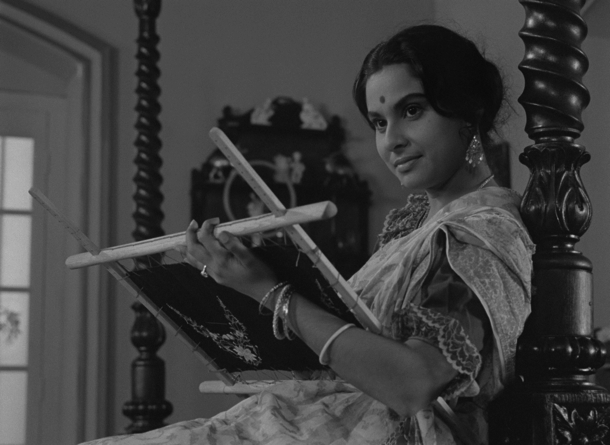 Set in Kolkata in the early 1880s and based on the short story “The Broken Nest” by Rabindranath Tagore, Ray uses utmost candour in this screen version, without betraying any of Tagore’s intentions. Charulata (M. Mukerjee) is the wife of publisher Bhupati (S. Mukerjee), publisher of a newspaper “The Sentinel”. Feeling that his well-educated and elegant wife is lonely, Bhupati invites his older brother Umapada and wife, Manda, to come and stay. When their company does nothing to alleviate his wife’s boredom he asks his younger cousin Amal (S Chatterjee) into the household. Both share a passion for literature and slowly the relationship becomes more and more intimate. Bhupati, submerged in his masculine world of politics, fails to see the development. But Amal, feeling guilty and threatened by Charulata’s intellect and his feelings for her, abruptly breaks off his relationship with disastrous consequences.

Very much in the style of the Japanese director, Yasujiro Ozu (An Autumn Afternoon), this beautifully-told domestic drama offers a pared-down and understated portrait of family life in nineteenth century India. Even in 1964, the role of the Indian woman of Charulata’s class, had not changed that much from the 1880s – many female viewers cried openly after the premiere and Ray was aware of the tension his film would create. Strangely, the Cannes Film Festival rejected the film but it was shown in the summer of 1965 at the Berlinale, were Ray won the “Silver Bear” for best director.

Despite the simplicity of the narrative, Charulata’s passion is still very much in evidence and Madhabi Mukherjee is still remembered today for her luminous performance. The monochrome camera glides through the big house with its imposing clocks and furniture as atmospheric sounds drift in from the street: the cries of street vendors and delicate birdsong from the garden.. Although she is surrounded by a legion of  of capable servants, Charulata is isolated until Amal appears. But despite his artistic sensitivity and feelings for her, Ray illustrates how he is still a man in a man’s world – not so far removed from Bhupati and when challenged, he is surprised that Charulata’s opinions differ (understandably) from views and his literary taste. In the end, he is shown as a coward who runs away, emerging a traitor to his own ideas. Bhupati is a cold man, who loves his politics and uses his power to exercise his own ego, not to understand people. In the end, the question of reconciliation is left open: and the final frame is illuminating.

Penelope Houston summed it up in 1965 when she wrote in ‘Sight and Sound’: “…the interplay of sophistication and simplicity is extraordinary”. And for Satyajit Ray this would remain the favourite of his film, “the one he would make again exactly the same”. Today, CHARULATA still feels modern. AS