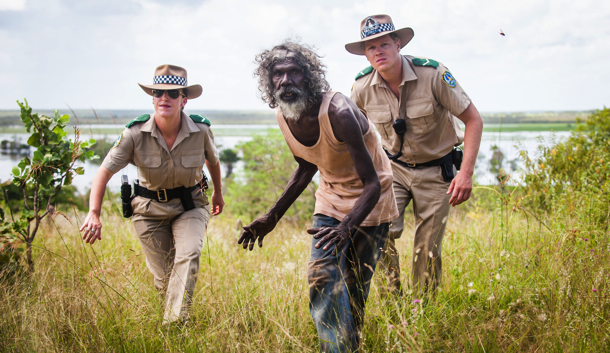 David Gulpilil won Best Actor ‘Un Certain Regard’ at Cannes this year for his portrayal of Charlie. Its his third collaboration with helmer, Rolf de Heer, after The Tracker and Ten Canoes, but this time, Gulpilil also co-wrote the script, making CHARLIE’S COUNTRY more personal, and autobiographical. Charlie, a ‘blackfella’ lives in Arnhem Land community, another name for reservation. Alcohol here is strictly forbidden, so is the possession of “deadly” weapons. Charlie and his friend Pete (Djigirr) are guilty on both counts, losing not only their weapons (spear and gun), but also the buffalo they have shot. Because Charlie can’t stomach much of the white men’s food, this incident is particularly vexing for him: he had helped the police, led by the friendly but strict Luke (Ford), to find white lawbreakers – in return for nothing. As a result, Charlie decides to leave the community for a life in the wild. Initially all goes well; he catches fish and enjoys his freedom. But torrential rainstorms affect his already damaged lungs and Pete assists in getting him to a Darwin hospital. There he meets another Aboriginal from Arnhem, who is dying. Charlie discharges himself and meets some “long grassers”, homeless Aborigines, who drink and smoke, living homeless in the parks of the city. When the police arrive to arrest them Charlie takes a shovel and smashes the windshield of their car. Sentenced to time in prison, he returns to Arnhem after his release, to teach the young Aborigine boys to dance – something Charlie did himself in front of the Queen at the opening of the Sydney Opera House.

This is a film about identity: Gulpilil, the most famous Aboriginal face on screen since he appeared as a 16year-old in Nicolas Roeg’s Walkabout, is very hard on himself because the prison sequence here is autobiographical. Gulpilil does not shrink away from his own failings, he is adamant to be held responsible for his actions. His face alone, seemingly cut in stone, speaks volumes. Proud and melancholic at the same time, it tells about the long struggle for cultural identity in a country  taken away from Aborigines by White settlers, who proudly consider themselves superior to Gulpilil and his fellow men and women. But his sense of identity is unbroken, even in prison he is neither cowed or intimidated. This is not only a film about ethnographical issues, but a poem, when spoken in Gulpilil’s own language, Yolngu. CHARLIE’S COUNTRY is a testament to permanent resistance, not glorious at all, but David Gulpilil is still walking tall. AS