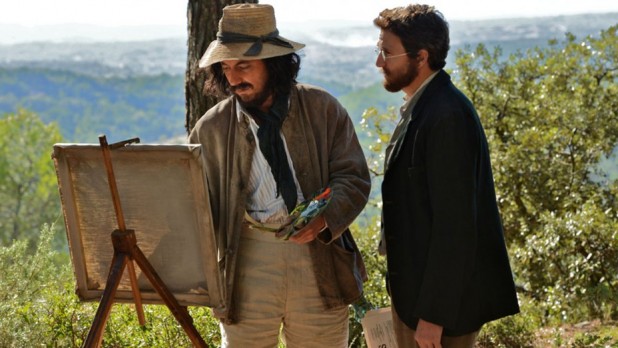 Emile Zola might have written some desolate novels but his private life appears to be rather pleasant according to CÉZANNE AND I exploring the close friendship between two of France’s most famous 19th century cultural geniuses: the titular novelist and the impressionist painter Cézanne. Unlike Gilles Bourdos’ tepid Rénoir (2012), there is plenty of drama here, as befits the subject-matter.

Writer and director Danièle Thompson’s painterly period piece imagines the two enjoying a beautiful bromance that lasted from childhood until their deaths, although it wasn’t without its tiffs and rivalries as the strong creative personalities often clashed giving rise to some moments of drama and even tears, and the racy often lyrical dialogue doesn’t hold back in expressing the deep intimacy of their conversations about the pleasure and pain of creativity (“do you still get a hard on from your writing?” asks Cézanne of his mate).

Starring Guillaume Gallienne (Yves Saint Laurent) as Cézanne and Guillaume Canet (Tell No One) as Zola this is a spirited and enjoyable – if occasionally soapy – affair with its sumptuous settings making great use of the gloriously lush and sun-drenched scenery of Provence and elegant boulevards of Paris and the Louvre, where the Salon de Réfusés episode descends into a brawl .

Eric Neveux’s intrusive score primps up moments of sauciness by a lakeside as Cézanne executes his’ plein air’ canvasses, and Jean-Marie Dreujou cleverly evokes some of the artist’s outdoor compositions with limpid camerawork and a fabulous choice of settings. While the painter comes across as the more louche of the pair, with his wealthy background and family funding; Zola is a more sober character and Canet plays him as a rather buttoned up and inaccessible, growing up a penniless orphan until he joins the successful bourgeoisie, as captured in the final scenes. The narrative unfolds from 1888, when Cézanne accuses Zola of writing a novel whose central character – a striving but unsuccessul painter – feels too near the bone for his liking. But Zola assures him that the novel in question ‘L’Oeuvre’ is not about his close friend. Most of the scenes  involves tête à tête set-toos between the pair highlighting their creative differences and expressing their feelings about sex and women. According to Thompson, they both fell in love with the same person, Alexandrine (Alice Pol), who would eventually become Zola’s wife. While Cézanne is restlessly married to his muse Hortense (Deborah François) there appear to be issues with his sexual performance, and she complains that “I fuck her too quickly and paint her too slowly.” The two debate Zola’s theatrical naturalist style that today feels stuffy and dated as opposed to Cézanne’s impressionism which proved the more universally evocative form of expression due to its avant-garde appeal that gave birth to modernism. Zola resents Cézanne’s monthly income that allows him freedom to explore, while the writer is hampered by his lack of funds. Meanwhile, Cezanne calls him a “a violeur et un voyeur”, somehow implying that his ideas were not original.

Artistic context of the era is further provided in the shape of fellow impressionists Edouard Manet (Nicolas Gob), Auguste Renoir (Alexandre Kouchner) and Camille Pissaro (Romain Cottard). This is a watchable and vivacious drama that paints an absorbing picture of two driven men but despite Thompson’s learned research CÉZANNE AND I  comes across as a lightweight drama rather than a resonant biopic of the creative duo. MT