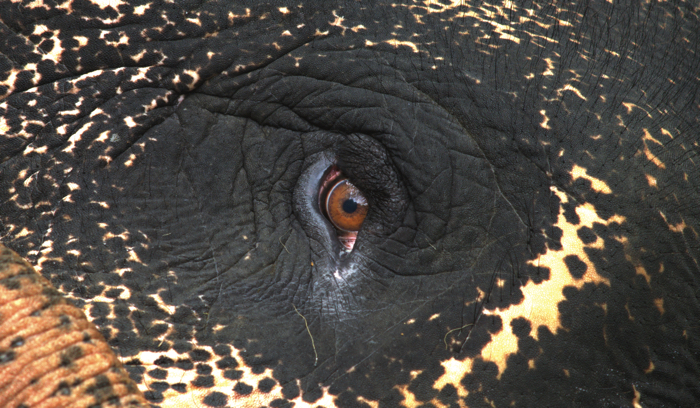 After Hunters Since The Beginning of Time (FID 2008), a film about the primitive whale hunters of the Bering Sea, Carlos Casas finds himself drawn to wide open spaces of the world where he has filmed his contemplative second documentary. This time the setting is the rainforests of Sri Lanka and the focus is another large mammal: the Indian elephant. Casas’ gaze is drawn to the peace and intimacy of this tranquil and remote location where his cameraman Benjamin Echazarreta closes in on the eye of an elephant, and its roughly textured hide that camouflages the massive beast from potential prey.

After a devastating earthquake the mighty beast Nga (who is getting on in life and is possibly the last of its species), is about to embark on a journey to find the mythical elephant’s graveyard with his mahout Sanra. The group of poachers following them will die one after the other under mysterious circumstances and spells.

The two explore the intensely remote location where only the ambient sound of exotic birds and insects disturbs the peace. The voyeuristic camerawork takes on the languorous pace of the elephant itself in order to explore the depths of lush rain-soaked verdancy in a green glade where a monkey listens to a broadcast about an earthquake laying waste to Asia, killing millions of people. The radio belongs to a local who is gently washing an elephant as he bathes waste deep in the muddy lagoon. There is tremendous affection in the way he carefully prepares and finishes his task, clearly a ritual he has performed many time before. But tragedy will follow as poachers are hot in pursuit. This meditative paean to massive beasts of the forest carries with it a sense of tragic foreboding as the tranquility of their clandestine hideout in mercilessly plundered.

Developing his film in the FIDLab 2013, Casas tries to shed a positive light on all this ecological tragedy. But is there a spiritual lesson to be learnt from the death of these highly intelligent creatures and the potential extinction of species. The elephant cemetery presents hope and possible rebirth, their souls immortal, just like humans. MT