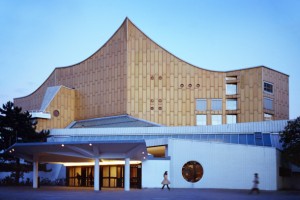 After directing Pina in 3D, Wim Wenders was the driving force behind this project about “the soul of buildings”. The six projects differ very much in their moods but, ultimately, the 3D does not enhance any of them, least of all Wenders own segment The BERLIN PHILHARMONIC. Buidling work near the Potsdamer Platz started in 1960 but when it was finished in 1963, the project’s new neighbour was the Berlin Wall. Designed by Hans Scharoun (who also designed the nearby “National Bibliothek”), the Berlin Philharmonic is composed of intersecting pentangles covered by a circus tent with the music stage in the centre. Meret Becker’s narration is, like all the other building’s “voices” in the first person singular, and we learn a great deal of history behind the Philharmonic – while watching its current Chief conductor Sir Simon Rattle conducting Debussy. Wenders is proud of the progressive figures behind the construction of the building: Scharoun could not work under the Nazis, and Willy Brandt, the sixties mayor of West Berlin, would later become chancellor of the Republic, having emigrated during WWII.

Unfortunately, Wenders goes along with the official version of unqualified praise for Hebert von Karajan, who succeeded Furtwängler as Chief Conductor of the orchestra in 1953, and after whom a street near the Philharmony is named. But like Karajan himself, who refused all his life any comment regarding his past, Wenders does not mention the conductor’s collaboration with the Nazis. Karajan joined the Party in April 1933 in his native Austria, many years before the Austrian section of the NSDAP came to power – not a sign of opportunism, but political conviction. Karajan later conducted Wagner’s “Tannhäuser” on Hitler’s birthdays in 1935 and quiet often the “Horst Wessels Lied”, the anthem of the SA. After the war it took many years for him to be cleared to conduct unrestricted, and during a tour in the USA in 1955, there were protests against him at Carnegie Hall. The state of Israel only invited the Berlin Philharmonic after Karajan’s death in 1989. It is somehow disappointing that Wenders, born in 1945, helps to conceal the past of one of Germany’s cultural post-war icons. 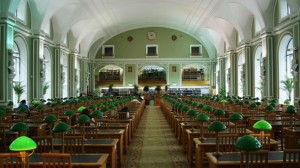 THE NATIONAL LIBRARY OF RUSSIA is the last completed documentary by the Austrian filmmaker Michael Glawogger (Workingmen’s Death), who died in April 2014, at only 54 years old. His film is solemn, as befits a building housing so many books from so many different political periods. “Now the books can live in peace with each other”, says the ‘voice’ of the library in St. Petersburg, “but before the change of doctrines led to books being banished, or even destroyed”. The immensely huge building with its long corridors and endless basements, is like a labyrinth; a combination of Kafka and Dostoyevsky, with no escape possible. Dark and gloomy place, and one can feel the past weigh down at every step. It was after all, not only the books which were destroyed. All of Russia’s past and present history haunts this building, the shadows of gloom covering the books, their quotes recited out loud, giving us an idea of the greatness of Russian literature and the tortures its writers had to suffer too often. 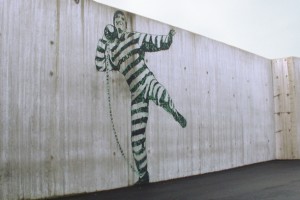 The Danish filmmaker Michael Madsen (Into Eternity) has chosen HALDEN PRISON in Norway for his segment. Perhaps not an obvious choice in the context, but the voice of prison psychologist Benedicte C. Westin narrating the building’s text, explains how much cultural identity this high security prison, built in 2010, represents. She opens with a quote by Foucault about the sad similarities between prisons, factories and schools. There follows another seemingly bold statement: “Prisons are the flipside of society”. Looking at Halden Prison, this soon becomes obvious. Because the huge complex has everything a village might have – complete with a little shop; a multi congregational chapel; a library; sports facilities and little apartments where some of the prisoners are allowed to have a life with their families for a limited period. Over a thousand CCTV cameras observe the goings on – replacing bars, but allowing spectacular views into the forest through the plate windows. Halden is a place were the staff believe in therapy not punishment. “People who have done terrible things also have a bit of good in them”, ‘postulates’ the building. Needless to say, reactionary media outlets have called the place a “luxury accommodation”. Contradicting this view, we are shown the isolation cell, a grim place where a prisoner has written obscenities on the wall with his own excrement. Modern and clean it certainly looks, but somehow the huge walls surrounding the complex obliterate any illusions: this is place of utter segregation from the outside world. And because it resembles ordinary life, up to a point, it may be even more cruel than the old-fashioned correction facilities: In Halden, you are reminded permanently of a community many of the prisoners will never be released back into. It may be ironic, but the only documentary not covering a historical cultural building, has produced the most innovative debate about the meaning of culture. 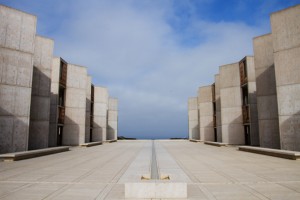 Robert Redford’s THE SALK INSTITUTE is by far the most conventional segment. It is more a hymn to science than anything else, a programmatic film about the (very American) belief in progress through hard work and some imagination. Different voice-overs of current and ex-members of the Institute and the designing architect, Louis I. Kahn, come together like a prayer. But DOP Ed Lachmann saves this rather too strait-laced documentary with innovative shots of the building, as if it’s floating in the wind. Overall, THE SALK INSTITUTE lacks any of the subjectivity of the other documentaries, it simply has too many exclamation marks and too few question marks: the building in La Jolla is shown by numbers, revealing little of its soul. 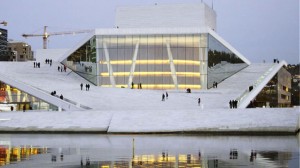 THE OSLO OPERA HOUSE by Margreth Olin just goes the opposite way: her building at the waterfront of Oslo, housing the Norwegian State Opera and Ballet companies, speaks lyrically and with emotional gravity; which is quite the opposite of the way the building looks. Covered in ice, it emerges like a behemoth left behind by space travellers. And Olin, who narrates with quotes from Bjorn Olaf Johannessen’s poetry, reflects these impressions: “I am an immigrant, an intruder on the edge of your fjord.” But the building has very passionate feelings for the people who work within her walls. It ‘speaks’ of her pain, hoping to be remembered by the many who come through her doors. In spite of its frosty exterior, it is a very human building; longing for recognition; wanting the best for the artists and feeling a palpable sadness as time passes and old faces disappear. Olin has created an emotional portrait, in which the building’s soul is very much a human one, even though an idealised version. 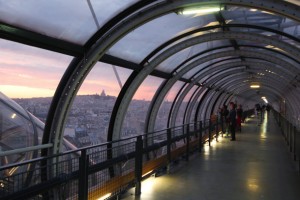 Strangely enough, CENTRE GEORGES POMPIDOU by the Brazilian born film maker Karim Ainouz, is the opposite of everything we associate with France or the French. His documentary is a sober twenty-four hour tour-de-force: one day from dawn to dusk, in which the building reflects, rather coldly and distantly, about its past, the visitors and staff. The linear structure enhances this feeling of strained objectivity. The narrator calls ‘himself’ “a living, breathing culture machine”, and it is exactly the impression we are given. When feelings come into play, they are somehow derogative, like the self-description of “having the nostalgic charm of the steam engine”. It is also the only self-critical building: having lost the sensational value of its early days, it has seemingly not replaced this with any other critical appraisal. On the plus side, the rather cool approach shows how hard the staff work, and, how much – despite the self-criticism – the public, particularly the younger ones – love the CENTRE. Perhaps Ainouz went for an understated approach, only to sing the praise of the CGP indirectly. AS

ON GENERAL RELEASE ON 10 NOVEMBER 2014 AT SELECTED CINEMAS