Archive for the ‘Berlinale 2021’ Category

I often wonder why some indie filmmakers stumble with such convolutedly arcane ideas when less is always so much more. With a strong story and a beautiful way of presenting it the rest will soon fall into place as Raul Domingues illustrates with his enchanting debut feature, an ethnographical portrait of nature entitled Terra Que Marca (Striking Land).

The affirmative circle of life goes on year after year in a small corner of rural Portugal where two people develop an ongoing relationship with nature transforming a barren plot of land in Casal da Quinta into a gift that keeps on giving, cumulatively, as the years roll by. 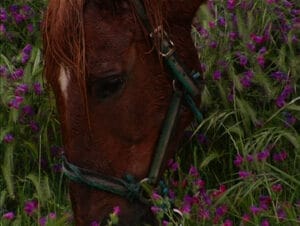 It’s often said that people don’t own the land – it owns them. And that’s true. People return year after year to places that draw them in to an emotional bond that strengthens as time progresses. Domingues bases his narrative on a fable relating to a piece of land that came into his family generations ago and perpetuate a feeling that this land must be nurtured and cared for.

Time is of the essence and Domingues is in no hurry to tell his story dictated by the rhythms of nature, he creates a perfectly balanced structure. Senses, images and sounds blend as the year unfolds from Autumn right through to the end of the second year where the burning down of vegetation provides the ash and minerals to fertilise the loamy soil for the next year’s growth, helped along by a healthy presence of earthworms to mix and aerate the earth.

Soon the robin redbreast makes his appearance along with some sheep and a clutch of chickens, all taking part in this thriving ecosystem. Grass grows, beans, apples and corn on the cob will flourish along with courgettes, barley, potatoes and maize for bread and polenta. Flowers in the shape of lilies, mallow and roses play their part, producing the pollen for the bees to do their stuff and the season draws to a close again as the orange trees yield a bumper crop weighing down the branches almost to the ground as they multiply in the following autumn.

Relying on an ambient soundscape, Domingues acts as his own DoP and editor in this magical meditation on the comforting power of nature. MT