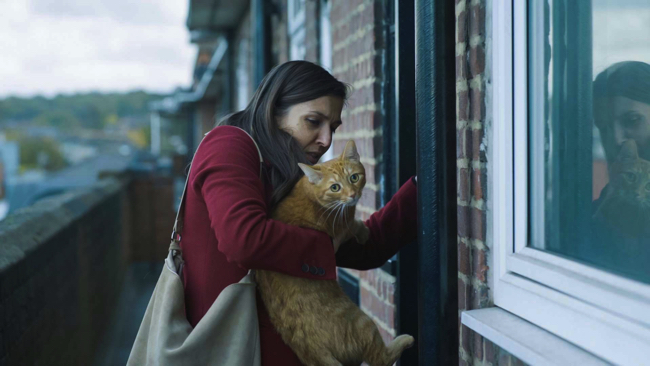 Award-winning Bulgarian duo Mina Mileva and Vesela Kazakova are no strangers to controversy. Their popular award-winning documentary Uncle Tony, Three Fools and the Secret Service was widely condemned by the authorities for exposing the corrupt totalitarian regime in their homeland.

Undeterred, they have pushed on with another potential firecracker in the shape of Cat in the Wall, this time based on real events in a Peckham council estate as experienced by a professional Bulgarian single mother trying to make it in London. This English-language sink-estate drama playfully deals with inflammatory themes such a Brexit, gentrification and the pitfalls of home-owning through the endearing tale of a wayward cat who also reserves his right to roam into pastures new.

Atanasova plays the main character Irina, an architect who has bought and renovated a council flat in a Peckham Estate where she lives with her young son Jojo (Orlin Asenov) and her brother Vlado (Angel Genov), a well-qualified historian who has turned his hand to installing Satellite dishes. Hoping to leave the corrupt post-communist set-up in Bulgaria to start a new life in Britain she soon discovers the grim reality of ‘playing the game’ in Britain.

Naturalistic performances from a cast of non-pros and experienced thesps and a refreshing script are the strengths of this light-hearted bit of social realism, piqued by dark humour. Utterly refusing to cow-tow to the usual Loachian style of Tory-bashing, this film still exposes some uncomfortable truths in a storyline that builds quite a head of steam and some set-tos that make it tense but also thoroughly grounded in reality. Unsurprisingly it never got a release in Britain.

Irina, Vlado and Jojo inject a much-needed breath of fresh air into a hackneyed scenario, where they uncover the usual set-backs to living in social housing – the urine-drenched lift is a classic example. But soon they find themselves face to face with a ginger tabby cat, and after adopting it for Jojo they are soon accused of animal theft by a neighbouring family.

As an educated immigrant who is well-placed to comment on Bulgaria and Brexit-Britain, Irina comes across as sympathetic and thoroughly likeable, eking out an existence that sees her pitching for architectural schemes while supplementing her meagre salary with bar work. Meanwhile she notices how most of her neighbours are living on generous state benefits that make finding paid work nonsensical.

“I didn’t come here to be a leech,” says the politically-savvy Irina who may well prove unpopular with diehard socialists in the audience. The recent words of Trump also echo: ‘if she doesn’t like it she can go back home”. And then there is her little son Jojo who is trying to make the best of his rather isolated existence as an immigrant child with no local friends, but who thinks he has found one in Goldie.

The directors maintain their distance, serving up all this ‘near the bone controversy’ with such a lightness of touch that it is difficult to take offence in a social satire that mostly feels even-handed. The character of Irina’s neighbour Camilla is a case in point. Played by veteran actress Camilla Godard she brings a gentleness to her part as a drug-smoking depressive who, it later emerges, bought the cat as a present for her special needs granddaughter, another example of the more hapless denizens of the estate. And while we feel for Camilla she also conveys an ambivalence that somehow cuts both ways. We can sympathise but also condemn her. Cat in the Wall is a clever and highly enjoyable drama that really shines a light on some shadowy issues in the home we now call post-Brexit ‘broken Britain’. At least we have our ‘Sovereignty’ despite losing our freedom of movement. Full marks to Irina and those pioneers like her, she will be sorely missed. MT