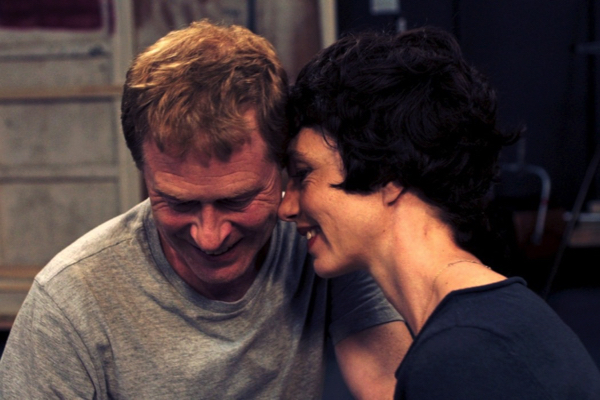 The Bitter Tears of Petra von Kant was a study in female sado-masochism and one of the best films of Rainer Werner Fassbinder’s short-lived but sparkling career. Casting is a pale rider in comparison. The play within a film sees Nicolas Wackerbarth attempting to update the original. It requires the audience’s familiarity with the 1972 feature, and the fate of the Fassbinder crew and cast, who were a close-knit family. Here Petra becomes a man – in line with the assumption that Fassbinder himself was the model for Petra (Margit Carstensen) – who sexually objectifies  younger lover Karin Thimm (Hanna Schygulla).

Newbie director Vera (Engel) is five days away from the first day of filming, but she still hasn’t found her lead. Well – she thought she had, in the shape of Almut (Lardi), but rumour has it that Vera and producer Manfred (Grossmann) are now looking for a younger actress, possibly Mila Ury-Teche (Sellem). The action gradually closes in on Karl (Haas), who is just a ‘prop’ reading the parts of the actors who can’t be on set. But he somehow fits the part of Petra, and hassled by the commissioning TV editor and the producer, Vera gets more and more keen on the idea of the part being male, and gradually Karl seems to fit the bill in resembling the original Petra. But will it all work?

Casting settles down to an odd mixture of comedy and drama: the majority of films in Germany are TV co-productions and rely on the goodwill of commissioning TV editors. Although the lampooning works successfully here, the narrative is too episodic to keep us interested and the haphazard handheld camerawork makes this worse, the protagonists dodging in and out of the frame in a  ‘running gag’ that becomes irritating, undermining its original intention.

Wackerbarth’s description of his female characters stays true to that of Fassbinder who once commented “women use their repression as terror weapons. I am not a misogynist, I am just honest”. The message here is the same. Michael Ballhaus’s images are light years away from Jurgen Carle’s would-be-avant-garde approach. On the whole, progress still seems an uphill struggle for German Cinema. AS