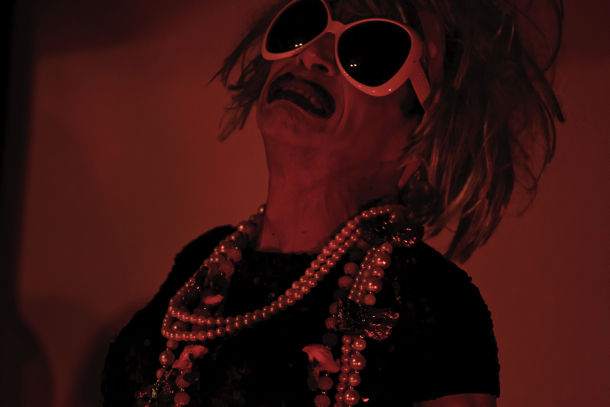 Davi Pretto’s quirky and claustrophobic documentary about João Castanha, 50, who lives in Porte Alegre, Brazil, with his 72 year-old mother Celina, is a study in decay and filial dedication. João is a variety artist and cross dresser, who earns his living in shabby little clubs. He is HIV positive, but smokes and drinks too much and overworks. His doctor says that his immune system is affected by his livestyle. Apart from this, his main problem is that he lives in the past, particularly the eighties which he and his friends in the club scene romanticise. The two of them are terrorised by Celina’s grandson Marcelo, a drug addict, who smashes flowerpots in the building and steals from them. Finally, Joao’s patience snaps, and he asks a friend, to give Marcelo a good beating.

The camera is literally caught in the small, darkened rooms of the Castanha apartment; the dressing rooms in the clubs are mere cupboard spaces. Everything seems to squeeze the life even more out of João. The reminiscences of the “good old days” always end with tales of how quickly Aids killed in those days – contrary to the long outdrawn “slow motion” death of today’s sufferer. Pretto takes a non-judgemental stance as to which version is more inhuman. João looks more like seventy, his emaciated face with the big brown eyes betrays his closeness to death – a fact, he often mentions. In his dreams he lays in a casket, people staring through the glass, looking at him without any sadness. In a wonderful montage we watch Joao on stage in a hospital room, whilst we see the shadows of Dirk Bogarde (Von Aschenbach) and Bjorn Andresen (Tadzio) from Visconti’s “Death in Venice” superimposed over the stage action. But otherwise there is very little beauty, just vanity and morbidity.

But there is still dignity in João’s life: he really cares for his mother. One has the feeling that he keeps himself alive for her sake. They are more like a couple than mother and son, he talks to her in the language of lovers. He is a different person when he is with her; he leaves his stage personality, which he always carries around with him outside the house, behind, when he interacts with her. Somehow we see the little João, the pure version of himself, before the pseudo decadence (which seemed so glamorous) and the illness got to him. CASTANHA is a thoroughly depressing version of Cabaret – where tomorrow belongs only to death. AS