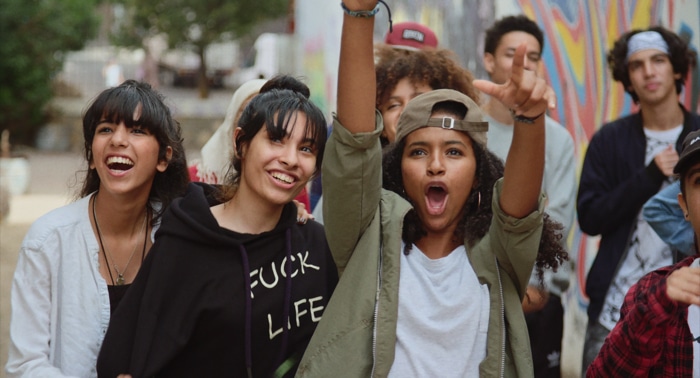 French-Moroccan director Nabil Ayouch is no stranger to controversy: His feature Much Loved about prostitution in his home country was banned, and Horses of God is a sober fictionalisation of the the suicide bombing that killed 33 people in Sidi Moumen, a deprived neighbourhood in Casablanca.

Ayoch has returned to Sidi Moumen with CASABLANCA BEATS, the first Moroccan feature in competition at Cannes since 1962. An uplifting story of local teenagers, uses rap and hip hop to hit back at the male-dominated set-up, and the religious bigotry that condones it. All actors are playing out their own lives with Anas Basbousi being the central character. Basbousi is a rapper, who founded the ‘Positive School’ in a cultural centre in Sidi Moumen where he clashes with the leader who feels his progressive style of music will alienate the centre from the rest of the community. In real life, Ayouch was instrumental in setting up the cultural Centre ‘Les Etoiles’ in Sidi Moumen back in 2014, together with author Mahi Binebine, on whose novel ‘Les Etoiles de Sidi Moumen’ Horses of God was based.

“Hip hop is an art form”, exclaims Anas, but not everyone shares his enthusiasm. It certainly proves to be a divisive art form, particularly for the parents of teenager Maha Menan who protest “Not for us”, as they drag their daughter out of the centre. Meriem Nekkach’s brother even tries to prevent her visits. But her counter attack makes things clear: “For you, women are slaves/It makes me sick/For you, being a man, means dominating us/look at our mother in chains/never had a voice, and never complained. While all this is happening the male religious enforcers (known at The “Beards”) patrol the streets extolling the teachings of the Quran: “Everything that lures us from God’s path is a sin”.

But the dance craze is refusing to back down. More centres along the lines of the Sidi Moumen “Positive School”, have now been stablished in Morocco, and Casablanca Beats’ main dancers, Ismail and Mehdi have now turned semi-professional. The film comes to a head with the long anticipated ‘big concert’, which should have won over hearts and minds – but ends in a violent confrontation with the “Beards” and their supporters, leaving Anas’ future in the balance.

This effervescent feature fizzes with fun thanks to the lively camerawork of Amine Messadi and Virginie Surdej. Casablanca Beats is not simply a North African version of the Bronx or Paris sub-culture, but an indigenous approach to rap/hip hop artists, defined by the fighting spirit of a youth rising up against a repressive and often violent parental and authoritarian regime. In true Middle Eastern style Casablanca Beats is a feisty but fervent hymn to music, life and love. AS